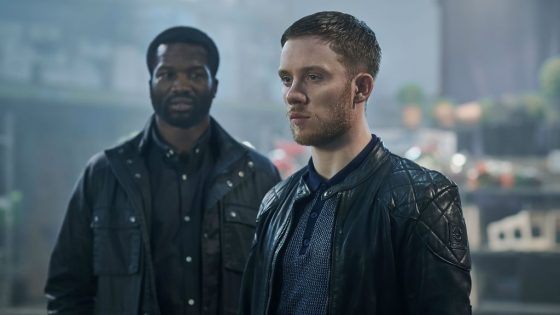 After delivering the all-time action classics The Raid and The Raid 2 along with the brutally horrific Netflix movie Apostle, director Gareth Evans is heading into the London underworld with a new crime thriller TV series, Gangs of London.  Starring Joe Cole from Peaky Blinders as Sean Wallace, he’s hellbent on vengeance when his crime boss father Finn Wallace (Colm Meaney) is gunned down.  Sean’s quest for revenge threatens to cause an all-out gang war to break out as the tentative peace between the rival gangs is broken down.  Michelle Fairley, Sope Dirisu, Lucian Msamati, Valene Kane and Mark Lewis Jones co-star and Evans is directing 5 of the show’s episodes with Corin Hardy directing three and Xavier Gens directing two.  It looks like Evans’ brutal style is in full effect, with lots of fights involving machetes and other bladed weapons and people getting drenched in blood while bones are shattered.  It’s debuting on Sky in the UK and on Cinemax in the US later this year and you can check out the trailer below.