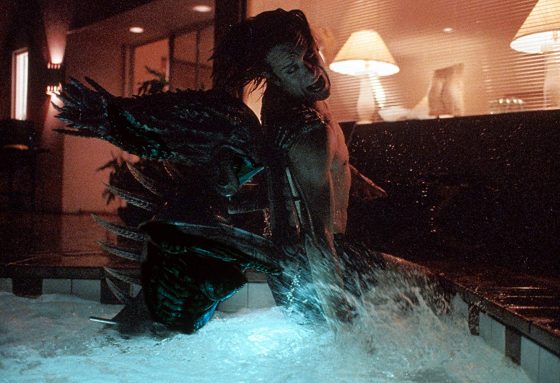 Released back in 1995, Species was like a schlockier Alien filtered through late-night Cinemax.  Featuring a ridiculous cast including Ben Kingsley, Alfred Molina, Marg Helgenberger, Forest Whitaker, Michael Madsen, a young Michelle Williams and the debut of Natasha Henstridge, who went from model to genre staple in the mid to late 90s.  Henstridge plays the grown version of Sil, an alien-human hybrid that escapes from the facility where she was raised after a secret government experiment.  Sil seeks to mate with a human male to spread her alien species across the planet and the government team tries to track her down before that can happen.  HR Giger designed Sil’s alien form and it definitely has his signature mechanical/organic/sexual trademarks.  The movie was a massive hit and spawned three sequels, one more in theaters with Henstridge and two direct to video.  You can watch the whole movie below thanks to YouTube (although you probably don’t want to watch it at work due to all the infamous nudity).