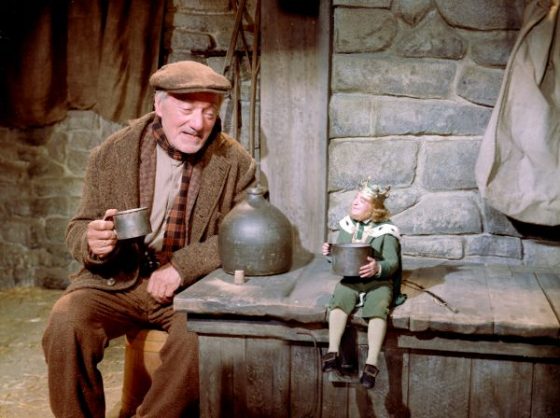 Considering everything that’s going on in the world right now, this St. Patrick’s Day seems like a good time to stay home and watch the Disney classic Darby O’Gill and the Little People with the Everything Action crew.

The movie stars Albert Sharpe as Darby O’Gill, a wily old groundskeeper who has been waging a decades-long battle of wills with King Brian (Jimmy O’Dea), the king of the leprechauns.  Darby was tricked by King Brian into losing his initial three wishes when he first caught King Brian and has been plotting ever since to recapture the little royal and get three proper wishes.  Meanwhile, a new young groundskeeper arrives, played by a young, pre-Bond Sean Connery, who has been hired to replace Darby but ends up wooing Darby’s daughter Katie (Janet Munro) and eventually getting involved in Darby’s crazy fantastical adventures.  Zach, Chris, and Chris Ali try to figure out what the rules of leprechauns are in this universe, who the actual villain is, if Connery is working extra to hide his normal Scottishness and more.  The movie is available to stream on Disney+ and you can sync it up and watch along with the Everything Action crew.