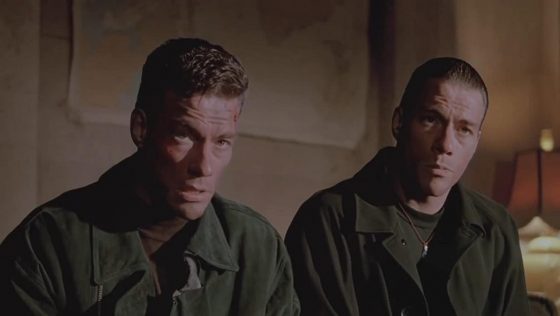 Teaming up for the third time with director Sheldon Lettich after Bloodsport and Lionheart, Van Damme delivered double the action with 1991’s Double Impact.  JCVD played both Chad and Alex Wagner, twins who were separated as infants when their parents are killed by the Triad.  Chad grows up with the family bodyguard Frank and the two run a karate dojo in LA while Alex grows up in an orphanage in France and becomes a criminal.  The brothers are reunited in Hong Kong when Frank reveals what happened and that they have a chance to take down the man who had their parents killed and get their rightful inheritance.  Tons of awesomely over the top 90s action ensues, including a JCVD rematch against the great Bolo Yeung, who is the main villain once again.  The movie is capped off by the wonderfully cheesy 90s jam “Feel the Impact”, which plays over the credits.  It’s a little foggy about who is actually behind the song.  Most official sources like Spotify and Wikipedia say it was composed and possibly performed by Arthur Kempel but IMDB also lists someone named Gen and JCVD himself uploaded a music video to his official page that says “Feel the Impact” by Totality.  Arthur Kempel seems like the most likely choice and you can check out the aforementioned music video from JCVD’s channel below.