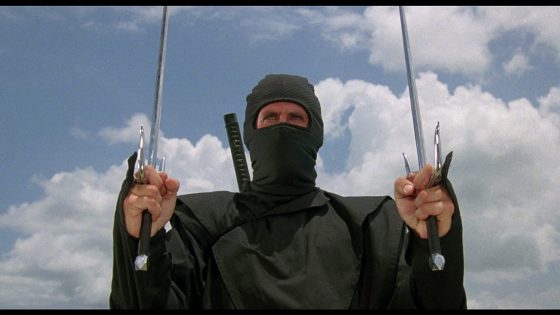 Cannon Films kicked off the 80s ninja craze with Enter the Ninja and they continued to churn out awesomely cheesy entries in the genre throughout the 80s, including the Michael Dudikoff starring American Ninja.  The movie was Dudikoff’s first major starring role after an early career modeling and doing supporting roles in comedies like Bachelor Party and he was discovered after a worldwide search for an action star after Chuck Norris passed on the movie (he would be in more than his share of Cannon movies though).  The movie follows Dudikoff as Private Joe Armstrong, who is stationed in the Philippines.  Joe is secretly a ninja, having been trained by a Japanese soldier who was still fighting World War II on a remote island who took Joe in when his parents were killed.  Joe discovers that black market dealer Victor Ortega has an army of evil ninjas on the island and Joe becomes determined to stop them with help from fellow soldier Cpl. Curtis Jackson (Steve James).  The movie spawned four sequels, although Dudikoff only appeared in the second and fourth movies with “American Samurai” David Bradley taking over in American Ninja 3.  You can watch the entire movie below thanks to YouTube.

Everything Action Theater: Pray for Death