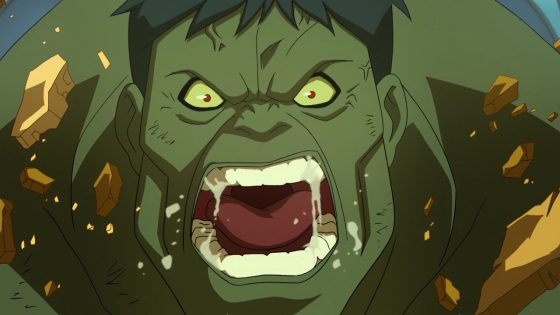 Few people would argue that for slightly over a decade, Marvel has dominated the world of live-action superhero films with DC offering up a few great movies but nothing at the pace or consistency of the MCU.  One area where DC does dominate though is in the world of animated movies, the latest arc of which culminated with the recent Justice League Dark: Apokolips War.  Marvel has offered up some bizarre takes on the origins of Iron Man and Doctor Strange and strange anime versions of characters like Punisher and Black Widow.  One Marvel hero who has had success in animated form is Hulk, who has arguably the best Marvel animated film with Hulk Vs and, today’s feature, an adaptation of the Planet Hulk storyline.  Released in 2010, the movie is an adaptation of Greg Pak and Carlo Pagulayan’s comic arc that started in 2006 where the “Illuminati”, a cabal of Marvel characters that includes Iron Man, Namor, Doctor Strange, Reed Richards, Black Bolt, and Professor X, decide that Hulk has become too dangerous to remain on Earth, so they lure him into a rocket and launch him into space.  Their intention is for him to land on a peaceful, uninhabited world but a wormhole send Hulk to the dangerous world of Sakaar, where he’s forced to become a gladiator.  If you were a fan of Thor: Ragnorak, a lot of the elements of that movie come from Planet Hulk, including the duo of Korg and Miek.  You can check out the entire Planet Hulk animated movie below thanks to YouTube.

The MCU Unites for Its Greatest Battle in Avengers: Infinity War (Trailer)