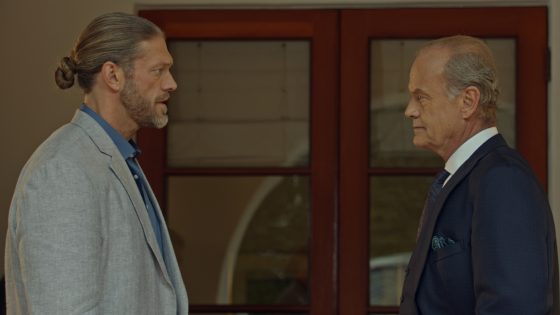 Airplanes have always been fertile ground for action movies whether it be Air Force One, Passenger 57, Executive Decision, Snakes on a Plane, and more.  The WWE’s Adam Copeland heads into the air for a heist based spin on the aerial action genre with Money Plane.

Copeland stars as Jack Reese, a thief who accumulated a massive debt from gambling.  After a botched job trying to steal a painting for crime boss Darius Grouch the Third aka The Rumble (Kelsey Grammar), Jack finds out that The Rumble has bought his debt and demands Jack and his team attempt a seemingly impossible heist aboard the flying illegal casino known as Money Plane.  After infiltrating the flight, Jack and his team run into numerous complications in their attempts to hack the servers and crack the vault.  Katrina Norman, Patrick Lamont Jr, and director Andrew Lawrence round out Reese’s crew and Tom Jane and Denise Richards co-star, and Andrew Lawrence’s brothers Matthew and Joey show up as well with memorable side character roles along with the always reliable character actor Al Sapienza as the no-nonsense bookkeeper on Money Plane.  Copeland is a decent leading action hero and he’s had very good TV roles recently on shows like Haven and Vikings but one of the most bizarre decisions of Money Plane is that it puts Jack in the cockpit for almost the entire movie, putting him out of the action that is going on onboard Money Plane.  It would be like if Wesley Snipes on Passenger 57 had to fly the plane for the entire movie and didn’t get into fistfights or shootouts.  It’s left to Jack’s team to engage in the usual heist/action movie situations while he mostly just talks on the radio or video chats with The Rumble.  Katrina Norman’s Isabelle does most of the action heavy lifting and she has a definite Fiona from Burn Notice vibe and some solid fights.  The true standout of the movie though is definitely Kelsey Grammar, who seems to be having a blast chomping scenery as The Rumble, torturing people while on video chat and makes over the top threats to Jack.

One of the things that most works against Money Plane is the budget.  I’m not sure what the actual budget was but the seams definitely show and it doesn’t let the premise truly live up to its insane potential.  After a build-up by The Rumble, when the crew gets on board Money Plane, it seems kind of chintzy and the first game in this illegal free for all is…Texas Hold ‘Em?  There are some more bizarre betting games later on but it’s all done remotely away from Money Plane and there’s not actually a lot happening onboard.  There are only about 4 or 5 sets and they all feel cramped and generic.  I can only imagine if this movie had the budget of something like Snakes on a Plane where you could truly flesh out the absurd bacchanal of the Money Plane the way it is meant to be seen.  As is, the limitations outstrip the glorious absurdity of the premise.

Money Plane is a solid little heist/action movie but there are visible limitations and some strange choices that keep it from reaching the potential of its premise.  If you’re a fan of Adam Copeland, it might be worth checking out and Kelsey Grammar is a ton of fun to watch but there are better movies in the aerial action genre and also movies that deliver on their absurd premises better.

Money Plane is out now on Digital and Video on Demand.