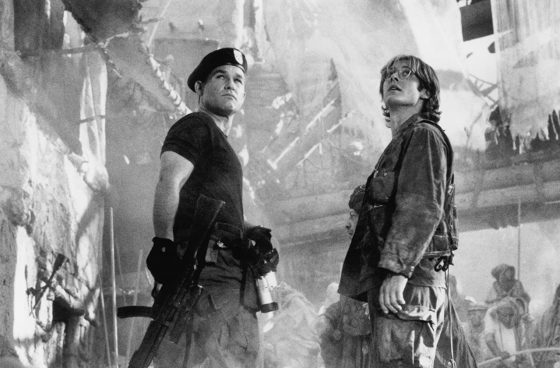 Debuting in 1994 and director Roland Emmerich’s follow-up to Universal Soldier, Stargate has inspired an entire universe of spin-offs with multiple TV shows and movies but you can watch the original here for the latest Everything Action Theater.  Starring Kurt Russell and James Spader, Stargate follows a team gathered together at a secret military installation to investigate a mysterious portal found in Egypt in 1928.  When the portal is activated, a team led by Colonel Jack O’Neill (Russell) and Dr. Daniel Jackson (Spader) cross the barrier and are shocked to find themselves on another planet with a society seemingly inspired by ancient Egypt, but ruled over by brutal overlords with advanced technology and armor based on the Egyptian gods.  Meeting the locals, O’Neill and Jackson eventually decide to help them overthrow their oppressors and free the planet from their rule.  Although the movie got mixed reviews, it was a pretty giant hit at the box office, setting the then-record for an October opening weekend and making almost $200 million worldwide.  Roland Emmerich’s next movie, Independence Day, would be even bigger and he would have more of a roller-coaster career throughout the 90s and up to today.  Check out the entire movie below thanks to YouTube.