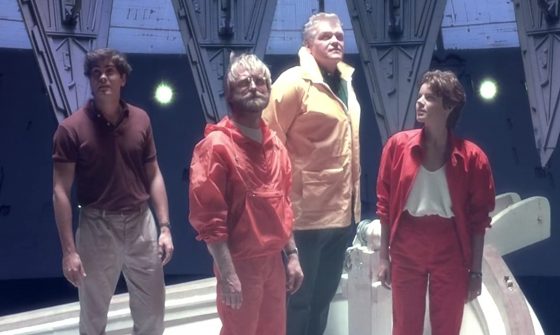 Celebrating 35 years this past June, Cocoon was one of the huge early movies for director Ron Howard, sitting between Splash and Gung Ho in his filmography.  Starring the late Wilford Brimley, Steve Guttenberg, Brian Dennehy, Don Ameche, Jessica Tandy, and Hume Cronyn, the movie followed the residents of a retirement home discovering that the swimming pool in the house next door seems to be given them renewed energy and vigor and it’s soon revealed that aliens from the planet Antarea are behind the magical swimming pool and have also chartered a boat from a local captain, played by Guttenberg, to find the “cocoons” that contain their fellow aliens who have been in stasis for thousands of years since the sinking of Atlantis, which was an alien outpost.  Along with a score by the great James Horner, the movie featured 80s soundtrack mainstay Michael Sembello with a song called “Gravity”.  It doesn’t seem to have charted despite being released as a single and it appeared on his album Without Walls along with being on the Cocoon soundtrack.  The music video for the song is wonderfully weird as it’s presented as something of an Unsolved Mysteries style recreation where Michael Sembello disappeared while working on “Gravity” and Ron Howard has directed a reenactment of the events leading to his disappearance, with a “lookalike” Michael Sembello starring in it.  It’s Ron Howard’s first and only music video directing gig and you can check it out below.