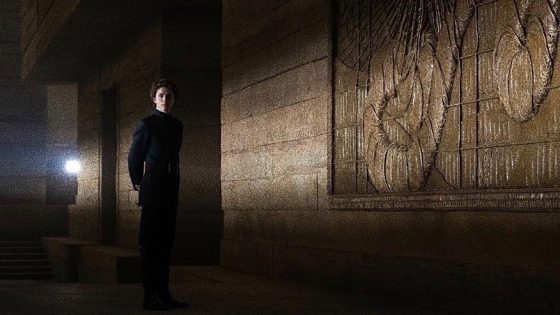 Past attempts to adapt the epic sci-fi classic Dune by Frank Herbert from visionary directors like David Lynch and Alejandro Jodorowsky have either been ambitious misfires or, in the latter case, never made at all and other attempts like TV miniseries have never really captured the spirit and scale of the novel either.  Blade Runner 2049 director Denis Villeneuve seems like he might be poised to finally pull off the adaptation that Dune deserves, if this insanely epic first trailer is any indication.  Coming in December this year, Dune stars Timothee Chalamet as Paul Atreides, the heir of House Atreides, who travels with his father Duke Leto (Oscar Isaac) to the remote planet of Arrakis, which House Atreides has been given control of and the only source in the universe of “the spice”, a drug that extends human life, grants superhuman levels of thought and always “foldspace” space travel to be possible.  The control of Arrakis is an elaborate plot by the enemies of House Atreides, who plot to eliminate the members of the family and take the planet for themselves.  Along with Chalamet and Isaac, the absurdly stacked cast includes Rebecca Ferguson, Jason Momoa, Josh Brolin, Dave Bautista, Stellan Skarsgard, Zendaya, Javier Bardem, Charlotte Rampling, and more.  If nothing else, Dune is going to be a visual feast but hopefully, Villeneuve is able to make the epic but complicated story more understandable to a wider audience.  Check out the trailer below.