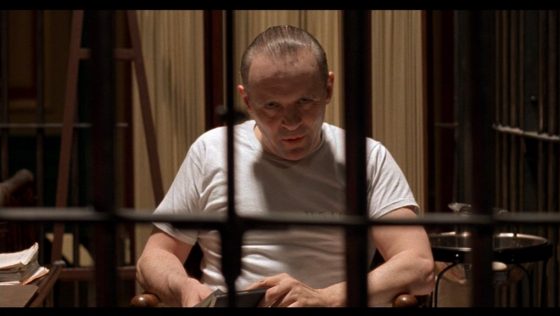 Although Michael Mann has the distinction of putting out the first adaptation of a Thomas Harris Hannibal novel with Manhunter, the Jonathan Demme version of The Silence of the Lambs is arguably the definitive Harris adaptation with an iconic Anthony Hopkins in the co-starring role of Dr. Hannibal Lecter.  Jodie Foster stars as FBI rookie Clarice Starling, who is recruited by Agent Jack Crawford (Scott Glenn) to assist on a case tracking down a serial killer named Buffalo Bill (Ted Levine), who kills young women and skins them.  Clarice is tasked with gaining information from Dr. Lecter, who despite his own sadistic crimes, could offer insights that could catch Bill.  The movie won five Academy Awards, including Best Picture and Best Director and it’s currently #74 on the AFI 100 list from 2007.  The movie spawned follow-ups of varying quality and eventually, the excellent NBC series arrived, rebooting the franchise with Mads Mikkelsen taking over spectacularly as Hannibal.  You can check out the entire classic movie below thanks to YouTube.