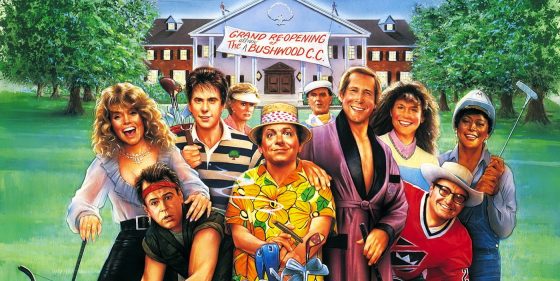 Released eight years after the iconic first film, Caddyshack II was both a financial and critical disappointment with the only thing that truly shined was Kenny Loggins’ new theme song, “Nobody’s Fool”.  While Chevy Chase returned, most of the original cast did not with Jackie Mason trying to fill the shoes of Rodney Dangerfield and Dan Aykroyd taking over for his Ghostbusters co-star Bill Murray with the great Robert Stack as the movie’s main antagonist.  The movie was also strangely knocked down to a PG rating after the R-rated hijinks of the first movie and there was much more focus on the iconic gopher, who could talk now in addition to his animatronic movements.  The only thing that truly succeeded was the theme song, which was another top ten hit for Kenny Loggins, performing just slightly below “I’m Alright” on the Billboard charts at #8 while “I’m Alright” had peaked at #7 and it was Loggins fourth top ten hit from a film soundtrack.  For the music video, Loggins and his band perform on a darkened golf course decked out with cool lighting while clips from the movie, mostly focusing on the gopher and Dan Aykroyd, are featured throughout, check it out below.