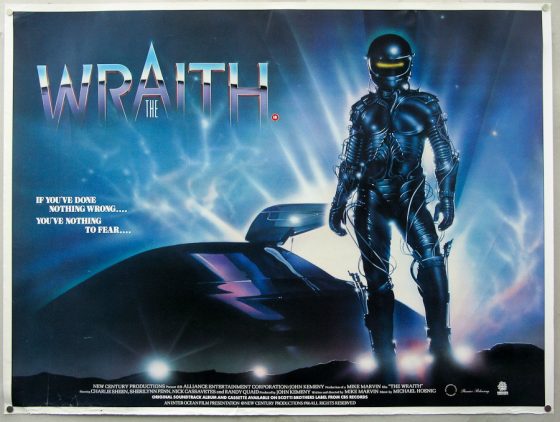 An 80s cult classic, you can check out the entirety of The Wraith below in the latest Everything Action Theater.  Starring Charlie Sheen as the titular Wraith, but also James “Jamie” Hankins, who is brutally murdered by a gang of street racing car thieves.  Somehow brought back by supernatural forces (or possibly aliens), Jamie is reborn as The Wraith, a black leather-clad street racer with a powerful and indestructible Dodge M4S Turbo Interceptor that he uses to get revenge on the gang that murdered him.  Jamie also takes on a new identity when not getting vengeance as The Wraith as Jake Kesey, who forms a friendship with Jamie’s brother Billy and Jamie’s former girlfriend Keri.  The movie is probably best remembered for its car but also its soundtrack, with a synthy score by Michael Hoenig and J. Peter Robinson and a soundtrack loaded with 80s hits from acts like Ozzy Osbourne, Robert Palmer, Motley Crue, Billy Idol and more.  Although it wasn’t too well recieved upon its initial release, it has become an 80s cult classic thanks to things like airing during the infamous Shocktober marathon on New York’s WPIX channel and shows like Cinema Insomnia.  You can check out the entire movie below thanks to YouTube.