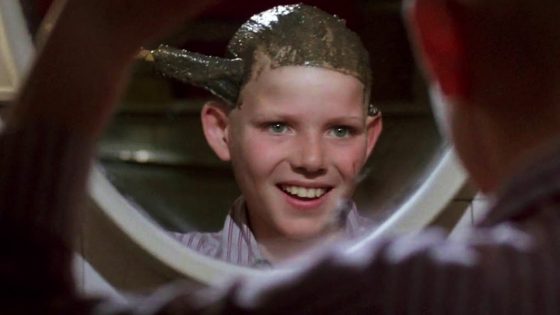 One of the most baffling, disturbing, and insane movies ever made, 1985’s The Peanut Butter Solution was actually the second in a series of movies under the “Tales for All” banner that came from France.  The Peanut Butter Solution follows a young boy named Michael, who runs into a group of ghosts at an abandoned, recently burned mansion and gets “The Fright”, which causes him to lose all his hair.  The ghosts take pity on him and give him a formula that will grow his hair back, but it works too well and his hair will not stop growing.  Michael gets abducted by his evil art teacher, Signor, who forces Michael to work alongside other children and use his magical hair to make paintbrushes that create paintings that come alive.  Alongside all that psychotic plotting and imagery, The Peanut Butter Solution also featured the first ever English language songs from Celine Dion, who had won the Eurovision contest two years earlier in 1983.  Dion performs two songs for the movie, “Listen to the Magic Man” and “Michael’s Song”.  There was an official music video for “Listen to the Magic Man” that features clips from the movie and incorpates the “magic painting” idea from the movie.  Check out the video for “Listen to the Magic Man” and Dion performing “Michael’s Song” below.