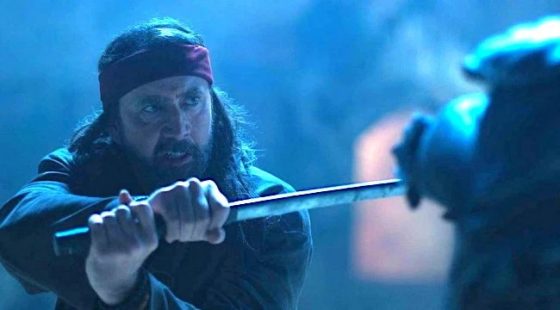 After the trailer dropped a few months ago, we’ve been eagerly awaiting the insanity of Jiu Jitsu, a movie where martial arts action stars (and Nicolas Cage) battle an intergalactic alien warrior.  The movie is now out on Digital and VOD and while it’s still extremely enjoyable, it’s not quite the over the top spectacle we were all hoping for.

Based on a comic book co-created by director Dmitri Logothetis, Jiu Jitsu follows a group of mysterious martial arts warriors who are tasked with battling an intergalactic alien warrior named Brax, who arrives on Earth every six years when a comet passed by Earth.  If Brax gets nine honorable fights, he will leave for another six years but if he is denied battle, he will destroy everything on the planet.  Alain Moussi, star of the new Kickboxer movies, played Jake Barnes, who suffers a blow to the head trying to escape Brax and winds up with no memory that he was part of the mysterious group or what is going on.  Plot and character development is not really a focus of Jiu Jitsu.  This is especially true in the beginning where Jake is in the custody of the US military and interacting with Marie Avgeropoulos’ Myra, a US Army intelligence officer who seems like she is going to be a main character and possible love interest but then completely vanishes from the movie and her fate is left completely unknown.  Everything involving the US military and their hunt for radiation in the area is completely useless filler and just drags out getting to the actual meat of the movie where the mysterious warriors battle Brax. I don’t even think a majority of the characters have their name spoken out loud in the movie and your only reason for caring about who lives or dies comes down to if you are a fan of the actual actor.  Action stars like JuJu Chan, Frank Grillo, Tony Jaa, Marrese Camp, and Rick Yune, who all co-star with Moussi, really have no defining features besides the weapons they use, so all your attachment is to the actors themselves.  The only person who really has any sort of character is Nic Cage, who plays the whacked-out former member of the secret group, Wylie, who now lives in seclusion making newspaper hats and delivering crazy zen wisdom to Jake on his quest against Brax but clearly has a stunt double in a terrible wig doing most of his crazy martial arts for fight scenes.

What little plot there is mostly just a skeleton to hang fight scene after fight scene, which is where the movie mostly excels.  It takes a little bit to really get going but once it starts, there are basically non-stop fights with Brax and each actor gets at least one featured fight against the alien invader.  They may not be the absolute best fights in each respective actor’s catalog but their fight styles up against Brax’s many alien weapons and abilities makes them feel unique and fun, although I’m not sure how much actual jiu-jitsu there is (Tony Jaa, for example, is a muay Thai fighter).  There’s also some solid non-Brax fight scenes, including an extended one-take sequence where Tony Jaa arrives to free Jake from the custody of the US military which turns into a POV sequence from Alain Moussi’s viewpoint (although there’s a strange decision made where you leave Jake’s POV when he gets hit or takes a hard fall and then you are a camera following him until it “reattaches” itself to Jake).  Logothetis does that and throws other tricks like rotating the camera to emphasize jiu-jitsu holds and using Creepshow style comic book panels to transition between sections of the movie.  Unfortunately, he also utilizes a lot of extremely spotty CG, including lots of cheap-looking blood and fake bullets, and Brax himself, while mostly actor Ryan Tarran in a suit, frequently reveals a terrible looking face beneath his mask and sometimes goes fully CG himself and that looks especially bad.

Combining elements of Mortal Kombat, Predator, and The Bourne Identity, Jiu Jitsu is a fun mash-up martial arts movie that mostly makes up with a plethora of fight scenes what it lacks in plot or character development.  Most of the cast have had better spotlights for their skills in other movies but the novelty of them all together alongside Nic Cage and an alien martial arts master makes Jiu Jitsu standout and offer something unique and entertaining.  It’s not the utter insanity you may have been hoping for based on the trailer but it’s still worth checking out if you’re a fan of the cast and want to see a more sci-fi spin on martial arts action.