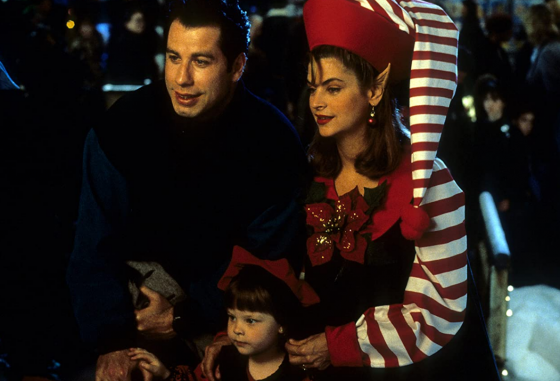 In 1993, the third and final installment of one of the most inexplicable franchise in film history, Look Who’s Talking Now, debuted.  The original Look Who’s Talking in 1989 was a monster hit, making almost $300 million worldwide, but the law of diminishing returns caught up the third entry, with Look Who’s Talking Now bombing with only $10 million off a $22 million budget.  While the first two movies focused on the inner thoughts of babies, with the children of the franchise now able to articulate their own thoughts, the focus switched to the family pets, including a mutt named Rocks (voiced by Danny Devito) and a stuck-up poodle named Daphne (voiced by Diane Keaton).  Along with the pet plot, the main plot involves John Travolta taking a new job as the private pilot of a hot executive named Samantha, drawing insecurity and jealousy from Kirstie Alley, who’s character has lost her job as well.  It culminates in a wild Christmas Eve that sees Kirstie Alley and her kids almost get devoured by wolves if not for the heroics of Rocks.  To promote the film and tie into the Christmas theme, French pop star Jordy made a special music video for the movie featuring child actors David Gallagher and Tabitha Lupien for his song “It’s Christmas, C’est Noel”.  The year before in 1992, Jordy set the Guinness World Record for the youngest singer with a #1 song at 4 1/2.  “It’s Christmas, C’est Noel” is a bizarre electronic dance, spoken word mash-up and you can check it out below.