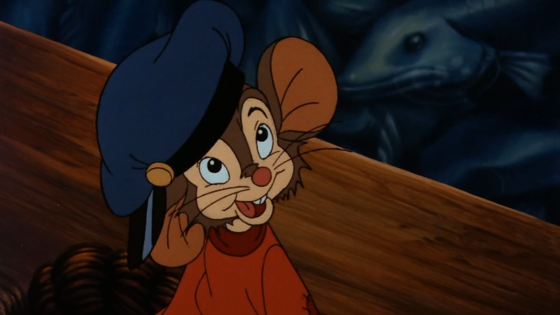 One of the most beloved movies from animation legend Don Bluth, An American Tail has remained a favorite of 80s and 90s kids and one of the reasons for its longevity is its iconic song, “Somewhere Out There”.  The song was written by composer James Horner and songwriters Barry Mann and Cynthia Weil and they were originally not operating under the idea of making a radio-friendly hit and just creating it for voice actors Phillip Glasser and Betsy Cathcart to sing in the film.  Executive producer Steven Spielberg was the one who thought the song had pop potential and recruited Linda Ronstadt and James Ingram to record a pop version that played over the end credits of the first movie and was also released as a sequel.  The song peaked at #2 on the Billboard Hot 100 charts and it also won two Grammy Awards in 1988, one for Song of the Year and the other for Best Song Written Specifically for a Motion Picture or Television.  It was also nominated for an Oscar for Best Original Song but lost to Berlin’s “Take My Breathe Away” from Top Gun.  For the sequel, An American Tail: Fievel Goes West, “Somewhere Out There” made its return but it was joined by a new song, “Dreams to Dream”, which was a song for Fievel’s sister Tanya that draws the attention of the villainous Cat R Waul, who makes Tanya the star singer of his saloon.  Linda Ronstadt returned for the pop version of “Dreams to Dream” but decided she didn’t want her vocals on the song.  The producers then went to Celine Dion, who recorded a version while working on her second English language album.  Ronstadt then changed her mind and came back and Dion’s version was replaced but the experience of working with her led James Horner to recruit her later on for the mega-smash “My Heart Will Go On” for Titanic  You can check out the music videos for the pop version of both “Somewhere Out There” and “Dreams to Dream” below.