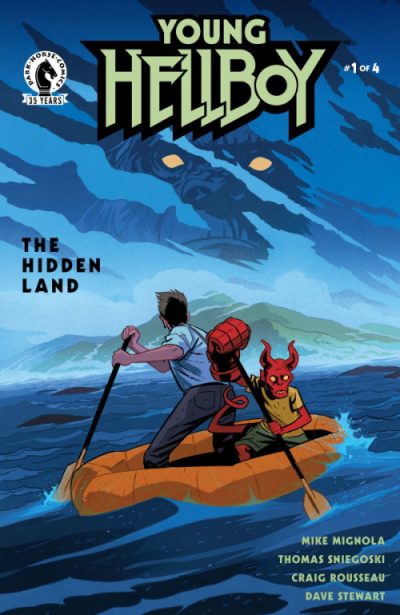 In 1947, Professor Bruttenholm and Hellboy are invited to see an excavation of a South American dig site. As father and son travel abroad on an airplane, trouble strikes and causing the plane to crash nearby a savage island. Fending off the wild beast and hungry predators, this untamed land holds many secrets that will kill to keep hidden.

Before Hellboy would be the tough, grizzled, wise-cracking B.P.D agent, he was a young demon boy, curious about all the mysteries of life. Growing up, his many adventures fighting evil would shape who he would later become. A simple trip for Bruttenholm and Hellboy to bond together turns into a fight for survival when abrupt chaos brings them to an uncharted island. Running away from giant crabs, dinosaurs, and giant apes, Bruttenholm and Hellboy must rely on each other if they ever want to leave.

Mike Mignola and Thomas Sniegoski revisit one of the many untold Hellboy’s childhood adventures. Taking place early years of Hellboy’s time on earth, he is inexperienced and has an innocent wonder to him. Professor Bruttenholm is right beside him, taking a more active role as a father to Hellboy to ensure he gets the proper care. It has been only a few years since Bruttenholm had adopted Hellboy and the two share a tight connection as father and son. Their bond will be tested in this adventure with whatever this hidden land has yet to reveal.

Craig Rousseau’s artwork is a slightly more colorful take on Hellboy but still captures the fantastical and gloomy designs. Rousseau articulates Hellboy’s smaller size nicely, but most importantly keeps Hellboy’s right hand of doom looking mighty, even if the rest of Hellboy doesn’t. Dave Stewart’s colorwork is great and focusing on soft colors to mute the tropical setting, but also brings out more of the red in Hellboy’s feature.

While long time readers are familiar with much of the Hellboy lore, Young Hellboy introduces new characters and settings to the expanded Mignola universe. This story has the energy of a pulp adventure comic that easily meshes with a reintroduction to Hellboy and Bruttenholm. The first issue nicely lays out the groundwork for a fun adventure filled with danger and excitement and is a great recommendation for Hellboy fans.