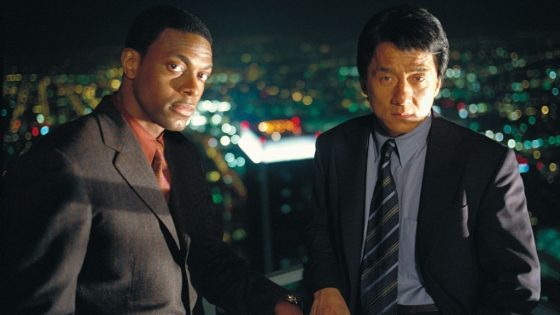 Along with featuring classic hits like “Another Part of Me” by Michael Jackson and “War” by Edwin Starr, the Rush Hour soundtracks were full of R&B and Hip-Hop hits.  The first Rush Hour’s soundtrack was anchored by Jay-Z’s monster hit “Can I Get A…” and “How Deep is Your Love” by Dru Hill and Redman, which was a #1 single.  The whole first Rush Hour soundtrack hit #5 on the Billboard Charts and was certified Gold.  Rush Hour 2’s soundtrack reached #11 on the Billboard charts and featured Ludacris’ single “Area Codes” and the album was again certified Gold.  Rush Hour 3, much like the movie, was definitely lacking compared to the previous two efforts, and the singles like Nas’ “Less Than An Hour” and Beyond & Luther Vandross’s “The Closer I Get To You” didn’t do much”.  Most of the songs feature clips from the movies in their music videos but Chris Tucker and Jackie Chan don’t appear in person in any of them.  Director Brett Ratner directed the video for “How Deep is Your Love” and Chris Penn makes a cameo in “Can I Get A..”.  Check out some of the big songs off the Rush Hour soundtrack below.