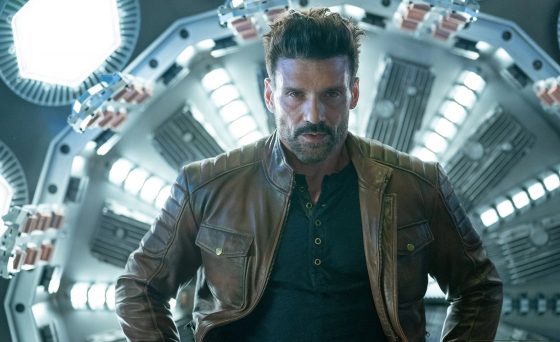 Originally filmed in 2018, it’s taken a while for Joe Carnahan’s latest movie Boss Level to be available but it finally hit Hulu this past weekend and it’s a fun, over-the-top entry in the recently burgeoning time loop genre.

The always fantastic and badass Frank Grillo stars as Roy Pulver, a former Delta Force operative who finds himself trapped in a time loop where assassins are after him for reasons he doesn’t understand, and the loop repeats every time he dies.  Roy eventually comes to realize that something about the project his ex-wife Jemma (Naomi Watts) was working on is the cause of the loop and her evil boss, Colonel Ventor (Mel Gibson) is the one who sent the assassins to take out Roy.  The movie does a great job of establishing the repetition of each day and every morning Roy is awakened to a knife-wielding assassin and a helicopter with a minigun hovering outside his apartment.  There’s a ton of fun in the blase way Roy reacts to this every time and Grillo has a great sense of nihilistic cockiness that kind of feels a bit like Deadpool, although definitely not quite as rapid-fire with the quips and not as much fourth-wall-breaking (although we do get constant voice-over from Roy that sometimes comments on the situation).  The movie also does a great job at doling out the reveals and every few loops, Roy learns some new piece of info to let him progress further into the day.  That kind of plays into the video gameesque themes around the movie but the movie doesn’t really lean that much into that idea.  There’s 8-bit style text that comes up for each new attempt by Roy on the time loop and there’s literally a video game arcade/tournament in the movie but there’s not really much else playing up the video game angle.  Maybe if the color palette was brighter or it did something similar to Scott Pilgrim, it would add some style and reinforce the game idea.  There are also some of the Groundhog Day-style phases where Roy gets into a funk and just lets himself get killed immediately every morning or some loops where he just spends time with his son Joe.  The action is fantastic throughout and there are some creative and darkly hilarious ways that Roy meets his end, usually at the hands of one of the colorful assassins after him.

There’s a great supporting cast around Grillo but most of the focus of the movie is on Roy and his inner monologue and the machinations of the time loop, so most of the secondary characters don’t really get fleshed out or given a lot to do.  Naomi Watts is wonderful as always but she’s not really in the movie all that much.  Mel Gibson gives a great villain performance that feels a bit like his Expendables 3 character but he doesn’t really get to mix it up that much.  Will Sasso is surprisingly the heavy for Gibson, although he also doesn’t really get to mix it up with Grillo too much.  Of the assassins, the only one that really makes much of an impact is Selina Lo as Guan Yin if only because of her ridiculous catchphrase every time she decapitates Roy.  Michelle Yeoh also feels like she’s wasted a bit as she’s introduced as a master swordsman that trains Roy in the art of sword combat but she’s only featured in an extremely brief montage and then disappears.  Ken Jeong and Sheaun McKinney provide some fun comic relief as regulars at a noodle bar that Roy tries to get to every day so he can get drunk before getting gunned down by the assassins.

If you like time loop movies and Joe Carnahan’s style, you’ll probably really enjoy Boss Level. Frank Grillo is great and the movie does a great job with the mechanics and tropes of the time loop genre while also providing lots of darkly hilarious deaths and over-the-top action.  The supporting cast could have possibly been given slightly more to do but if you have Hulu, definitely check out Boss Level if you haven’t already.