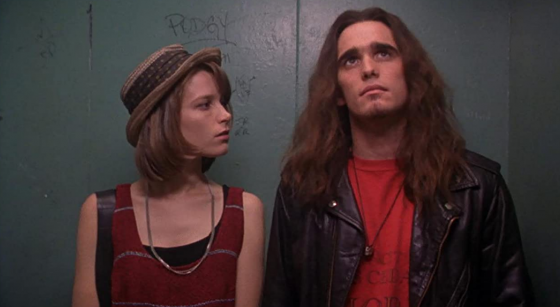 Following up his directorial debut Say Anything, director Cameron Crowe helped bring the grunge movement to the mainstream in 1992 with the movie Singles and its soundtrack.  Set in Seattle, Singles follows a group of twentysomethings who live in the same apartment block and their various personal and romantic lives.  The grunge side of things was most prevalent in Matt Dillon’s storyline, as he plays Cliff Poncier, the lead singer for a grunge band called Citizen Dick that was actually comprised of the actual members of Pearl Jam).  Chris Cornell, Alice in Chains and Soundgarden all appear in the movie as well.  The soundtrack for singles included songs from Pearl Jam, Alice in Chains, Mudhoney, Screaming Trees, The Smashing Pumpkins, Paul Westerberg (who recently went solo from The Replacements), and Mother Love Bone.  The soundtrack was a massive smash and went 2x Platinum and was one of the highest-selling movie soundtracks of the 90s.  It’s also credited for making bands like Alice in Chains, Pearl Jam, and Soundgarden explode in popularity outside of the “Seattle Scene” and was even ranked at #19 on Rolling Stone’s list of the 50 greatest grunge albums of all time.  Check out some of the music videos (including Paul Westerberg’s “Dyslexic Heart” that was directed by Crowe) and songs from the movie below.