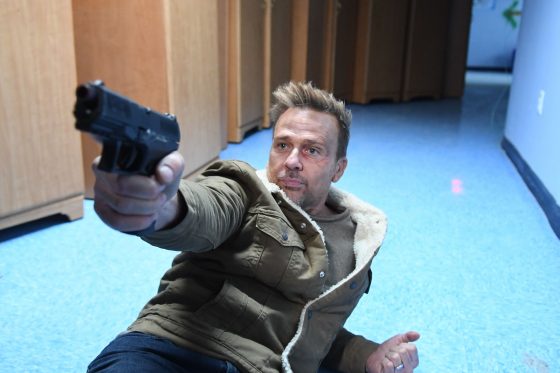 The Die Hard formula is a well-worn scenario in the world of action movies and the newly released Assault on VA-33 is a decent if unremarkable, entry into the genre.

Sean Patrick Flanery stars as military veteran Jason Hill.  Suffering from PTSD due to a mission that went bad while he was deployed, he attends therapy at the VA-33 hospital, where his wife Jennifer (Gina Holden) works as a therapist (although not Jason’s).  After his latest session, Jason and his daughter Sarah (Sarah Elizabeth Jensen) are leaving to get lunch when he notices suspicious men arriving at the hospital and he leaves Sarah in their truck to go investigate.  It turns out that a group of armed terrorists have taken over the hospital since a high-ranking general arrived for an emergency session with Jennifer and Russian terrorist Andrei Rabikov (Weston Cage Coppola) wants to torture the general for the whereabouts of his captured brother.  Jason has to go into John McClane mode and stealthily take down the terrorists one by one. One of the big selling points of the movie is that Marc Dacascos and Michael Jai White appear, with Dacascos as the terrorists’ sniper and White as the local police chief. The movie doesn’t really do much to differentiate itself from other movies in the Die Hard mold; it hits most of the beats you would expect and the plot follows a fairly standard path except for a truly bizarre resolution to one aspect that I still can’t even wrap my mind around (it involves characters making deductions about where hostages are being held by a cell phone video…that they cannot see because they are watching the feed from another cell phone).  The hospital setting is fine and it seems like they were actually able to film in a hospital under construction but that also adds the question of why would a hospital in such a state of construction still allow patients, especially a member of the Joint Chiefs of Staff?

Sean Patrick Flanery is a solid action hero and, maybe because I haven’t seen him in anything in a while, he seems to have developed a sort of Mickey Rourkeesque grit where his voice is much rougher and his face has a lot more character.  He does a good job of selling his character’s PTSD and injuries and makes a few decent quips while dispatching the bad guys.  Weston Cage Coppola, son of Nicolas Cage, is a solid villain and, while he doesn’t go as mega as his dad, he has some solid rage-fueled screaming moments and a certain sense of self-awareness that make him an interesting villain.  His main henchman Eric, played by Richard Gabal, is also interesting in that he is much more weaseley and sadistic than his appearance would lead you to believe.  Michael Jai White and Marc Dacascos bring some action gravitas to the movie but neither one has much to do.  Dacascos gets to have the best fight of the movie with Flanery and they exchange some fun banter during it but it’s over fairly quickly.  White is sort of in the Al Powell role where he’s Flanery’s connection to the outside world, although he is much more skeptical about what is going on than Al was in Die Hard, and he doesn’t get a chance to flex his martial arts prowess at all.  The movie also does what I think is a fairly interesting thing with its characters where almost no one is safe and people are dispatched quickly and abruptly.  There are members of the terrorists that the movie spends time building up with personality quirks, like Rob Van Dam’s getaway driver, and you would expect them to face off eventually with Flanery but most of them are simply shot and killed quickly and the plot moves on.  It’s an unexpected element that does add some uniqueness even if the plot is pretty standard.