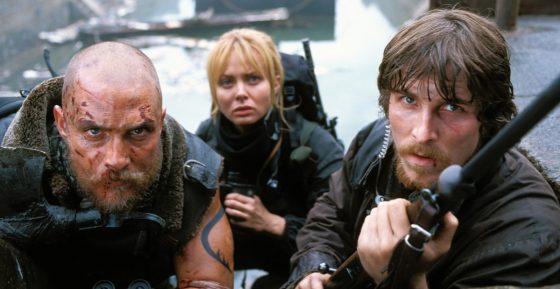 Back in 2002, Christian Bale, Matthew McConaughey, and Izabella Scorupco battled dragons in Reign of Fire.  When construction of the London Underground unleashes hibernating dragons, they proceed to destroy most of the planet and leave humanity on the brink of extinction.  Christian Bale leads a community of survivors in England (including a pre-famous Gerard Butler) who are trying to avoid detection from the dragons and survive but a group of Americans, led by the crazed Denton Van Sant (McConaughey) arrives and has a bold plan to find and kill the one male dragon in existence.  If they can kill the male dragon, the dragons can no longer reproduce and humanity might have a chance to take back the planet.  The movie was directed by Rob Bowman, who also directed Airborne, Elektra, and the first X-Files movie, but that’s pretty much it for movies, as he went on to mostly TV work.  Reign of Fire didn’t get the greatest reviews when it came out and was also a financial disappointment by grossing $82.2 million on a $60 million budget.  There’s still some goofy charm and some cool action sprinkled throughout, including McConaughey trying to go full Viking berzerker on a dragon with an ax.  You can watch the entire movie below thanks to YouTube.