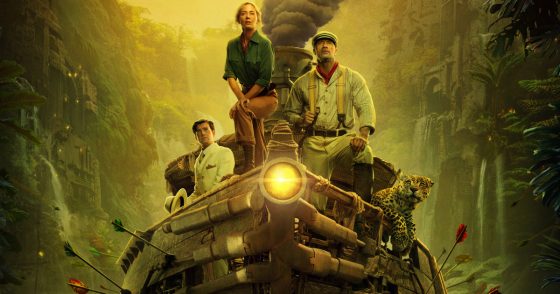 After numerous delays, including the inevitable one last year due to Covid, Jungle Cruise is finally set to arrive in July this summer.  Co-starring Dwayne Johnson and Emily Blunt, The Rock is Frank Wolff, a jungle boat skipper who normally cons tourists out of money with fake adventures but he’s hired by Blunt’s Dr. Lily Houghton, a British researcher who believes far up the Amazon is a tree that contains unparalleled healing properties.  Jake Whitehall plays Lily’s brother McGregor, who tags along on the adventure while Edgar Ramirez is a supernatural villain named Aguirre and Jesse Plemons and Paul Giamatti co-star as well.  The movie is directed by Jaume Collet-Sera, who has been teaming with Liam Neeson for years on most of his action movies, including Non-Stop and Run All Night, and directing The Rock in this got him the gig to direct Black Adam, which will be out next year.  It looks like Disney is going for a sort of African Queen style throwback mixed with the supernatural craziness of the Pirates movies and it seems like Blunt and Johnson have some fun chemistry and back and forth going.  The movie will be out in theaters on July 30th but you can also buy it on Disney+ via Premier Access for the $29.99 fee on top of your normal Disney+ subscription.  Check out the new trailer below.