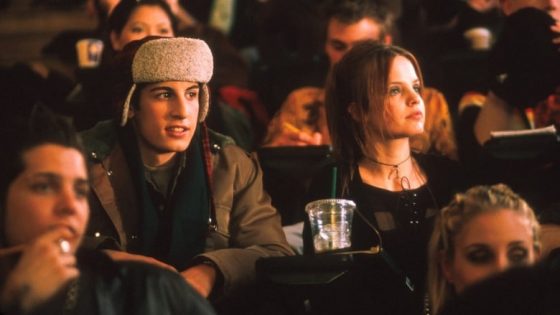 A year after American Pie exploded in popularity, star Jason Biggs was in a much smaller teen comedy, 2000’s Loser, which failed to do much critically or commercially.  Its soundtrack, however, was packed with late 90s/early 2000’s hits, including “Teenage Dirtbag” by Wheatus.  In the movie, which was directed by Clueless and Fast Times at Ridgemont High director Amy Heckerling, Biggs plays college student Paul Tannek, who is dubbed a loser when he goes from his small town in the Midwest to a university in New York City.  Looked down on by his roommates, he falls for one of his classmates, Dora Diamond (Mena Suvari), who is having an affair with her English professor, played by Greg Kinnear.  The movie featured songs like “The Bad Touch” by The Bloodhound Gang, “(Pretty Fly) for a White Guy” by The Offspring and “So Much for The Afterglow” and “I Will Buy You a New Life” by Everclear, who appeared in the movie as Paul and Dora attend one of their concerts. “Teenage Dirtbag” is the song that got the full music video treatment though, as Biggs and Suvari star in it and basically do a sort of mini version of their movie relationship arc.  The song was a big hit for Wheatus, especially overseas in places like Australia and the UK, where it went triple and double platinum respectively.  It reached #7 on the Billboard Alternative Airplay charts and it was the lead single for the debut album of the same name.  Check out the music video below.