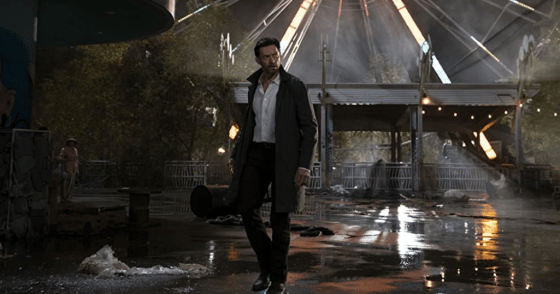 Hugh Jackman stars in the new mind-bending sci-fi noir from Westworld co-creator Lisa Joy, who is making her directorial debut with Reminiscence.  Jackman plays Nick Bannister, who offers a service that allows people to relive their past memories in a dystopian future where war rages and the world’s water level has risen and put many cities underwater.  When one of his clients, Mae (Rebecca Ferguson), disappears, Nick becomes obsessed with finding out what happened to her, even if it means going to dangerous levels in his memory machine.  Thandiwe Newton, Daniel Wu, Cliff Curtis, Marina De Tavira, Mojean Aria, Brett Cullen, Natalie Martinez, Angela Sarafyan, and Nico Parker co-star. It looks like the movie is a combo of classic noir tropes combined with the brain-melting storytelling that Joy and her husband Jonathan Nolan bring to Westworld and there is almost definitely going to be some sort of twist about what is actually happening.  The movie is out in theaters and on HBO Max on August 20th and you can check out the trailer below.