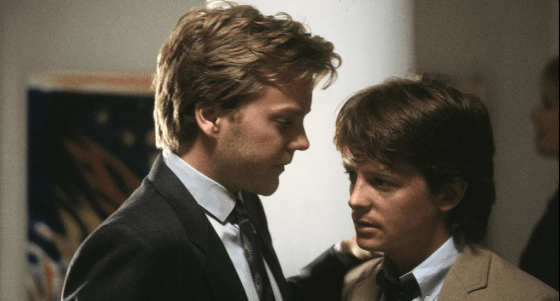 Toward the end of Family Ties and right before Back to the Future Parts 2 and 3, Michael J. Fox went slightly darker for his role in Brights Lights, Big City in 1988, which featured Bryan Ferry’s “Kiss and Tell” on the soundtrack.  Fox plays Jamie Conway, who is a fact-checker for a major New York City magazine.  After his mother’s death and his model girlfriend, played by Phoebe Cates, leaves him, he spirals into seemingly endless booze and cocaine benders, usually accompanied by his friend Tad, played by Kiefer Sutherland.  It’s a bit similar to Less Than Zero, which many critics compared it to, which came out the year before.  The soundtrack featured artists like Depeche Mode, Prince, New Order, Donald Fagen along with Bryan Ferry.  “Kiss and Tell” reached #31 on the Billboard Hot 100 and was nominated for “Best Video from a Film” at the MTV VMAs, even though the video doesn’t really have anything to do with the movie and instead just features Ferry and model Denice Lewi, who also appeared on the single’s photograph cover.  The song also appeared on Ferry’s Bête Noire album and was Ferry’s 26th single overall.  You can check out the video below.