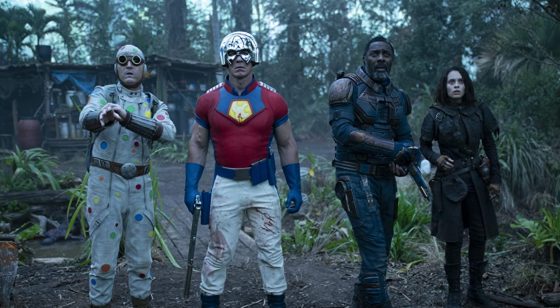 Idris Elba takes center stage in the new Suicide Squad trailer as we see how his character Bloodsport got recruited into the band of maniacs created by Amanda Waller (Viola Davis).  In prison, because he managed to put Superman into the ICU with a Kryptonite bullet, Bloodsport is forced to join Task Force X when Waller uses his daughter’s legal troubles against him.  Joining OG members Harley Quinn (Margot Robbie), Rick Flagg (Joel Kinnaman), and Captain Boomerang (Jai Courtney), the squad also has a slew of new rogues including Polka Dot Man (David Dastmalchian), Ratcatcher (Daniela Melchior), Peacemaker (John Cena), Javelin (Flula Borg), The Thinker (Peter Capaldi), Weasel (Sean Gunn), Savant (Michael Rooker) and King Shark (Sylvester Stallone).  Waller sends the Squad to Corta Maltese, where they are tasked with destroying Jotunheim, a former Nazi prison and laboratory where something called Project Starfish is being worked on.  James Gunn is directing and this Suicide Squad movie looks like what the first one should have been with tons of crazy rogues, lots of humor, and over-the-top action.  The movie is out on August 6th in theaters and on HBO Max and you can check out the new trailer below.