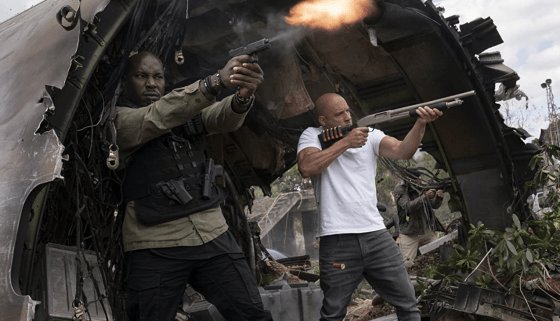 After over a year of delay because of everything that happened last year, the next chapter of The Fast Saga, F9, is finally here but this time around the franchise’s trademark absurd action are bogged down with seemingly endless Toretto drama.

Picking up a few years after The Fate of the Furious, Dom (Vin Diesel) and Letty (Michelle Rodriguez) are living on a farm in the country trying to give Dom’s son Brian a quiet life.  The peace is broken when Tej (Ludacris), Roman (Tyrese Gibson) and Ramsey (Nathalie Emmanuel) arrive and reveal that Mr. Nobody’s (Kurt Russell) plane was taken down by a mysterious operative and Cipher (Charlize Theron) was taken from custody.  After investigating the crash site and dodging the local militia, the group is attacked by Jakob Toretto (John Cena), the long-estranged brother of Dom and Mia (Jordana Brewster), who takes a piece of tech that the group found in the wreckage.  It turns out that the tech is part of Project Ares, a satellite weapon that can infect and control literally every piece of digital technology on the planet, and Jakob and his rich benefactor Otto (Thue Ersted Rasmussen) want to complete it and take over the world.  The ridiculous MacGuffins, team banter, and the absurd action are what everyone is mostly going to the Fast and Furious movies for these days but F9 gets really bogged down in Toretto drama that brings everything to a crawl every time it comes back up.  There are multiple flashbacks to young Dom and young Jakob and the movie seems to believe their story is the equivalent of some sort of Biblical epic, Cain and Abel driving street racers, and it’s presented in such a self-serious manner that starts to drain the fun out of everything else.  The drama also impacts the performances of Diesel and Cena, who seem to be competing to see who can be more scowly and serious and it doesn’t really make Jakob a fun or interesting villain, not like a Cipher, who in F9 is sort of a taunting Hannibal Lecter for Otto and Jakob, or Deckard Shaw in Furious 7.  The movie is also way too long as there is no reason for a movie like this to be approaching 3 hours and you definitely feel the length at times, especially after the first big action set-piece when the initial drama and plot mechanizations are doled out

Luckily, despite all the overly long character drama, the action is still as ridiculous as ever, possibly even more so this time around.  The initial action sequence sees the gang fighting off a militia while driving through a minefield and giant electromagnets come into play in multiple action sequences, later on, causing cars to fly toward the gang’s cars or repelled away, although the use of the magnets in both the middle and end action sequences kind of makes both feel a bit samey and not as creative as previous set pieces in the franchise.  I don’t think F9 can match anything in Fast Five or Furious 7, which to me are the two pinnacles of the franchise so far.  Outside of the Dom/Jakob backstory and deadly serious faceoffs, the rest of the crew is as you expect them to be.  Tej, Roman, and Ramsey have the same chemistry and banter as the previous movies and this might actually be the best movie for Ramsey so far, as she gets a fun bit in the middle action sequence where she’s forced to drive a truck and reveals she doesn’t know how to drive.  It’s also great to have Sung Kang back as Han but after building up possible ridiculous theories for how he survived the fiery explosion in Tokyo Drift, the movie’s explanation is very hand-wavey and unsatisfying, but at least the character is back with the Fast Family.

If you’re a fan of the franchise, F9 has most of what you have come to love and expect from the series, which is mostly over the top, physics-defying action, absurd plots, and fun character banter.  The main thing dragging F9 down and keeping from it being a top-tier entry is the overly long and self-serious backstory surrounding Jakob and Dom, which never seem to end and feels like it could have gotten greatly condensed and we’d still get the gist of their feud and estrangement.  Hopefully, with that out of the way, the final two movies in the franchise can just be straight fun nonsense.