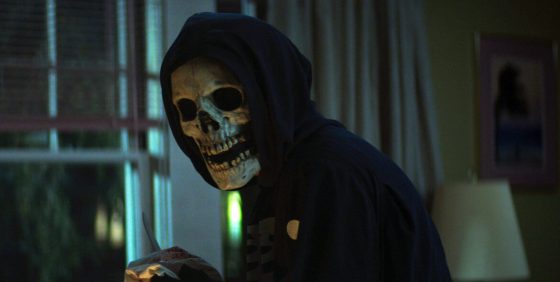 Back in the 90s, if you had been reading Goosebumps as a kid, you probably “graduated” to RL Stine’s more mature series, Fear Street, which followed various teenagers in the town of Shadyside as they dealt with supernatural horrors.  Fear Street has arrived on Netflix with a big summer event trilogy as three different eras of the town are explored in three different movies and Part 1 is set in 1994.

Fear Street Part 1 follows Deena (Kiana Madiera) and Sam (Olivia Scott Welch), who used to be a couple until Sam moved to the ritzier and safer neighboring town of Sunnyvale.  After a fracas before a football game between Shadyside and Sunnyvale teens, Deena and the Shadyside kids are harassed on the road back home by Sam’s new boyfriend Peter, who follows them, along with Sam, in his car.  Deena, trying to get rid of them and mad at Sam, accidentally causes Peter to lose control of his car and crash.  Everyone is fine but Sam inadvertently disturbs the grave of local Shadyside legend, and witch, Sarah Fier.  The legends state that Sarah strikes from beyond the grave, possessing people in Shadyside and causing them to become killers.  Three of the former killers come back from the grave and begin to stalk Sam, along with Deena, Deena’s brother Josh (Benjamin Flores Jr), and Deena’s friends Kate (Julia Rehwald) and Simon (Fred Hechinger).  Part 1 definitely pays homage to the slashers of the era, most notably Scream, but layering in more supernatural horrors on top.  There’s a very Screamesque opening with Maya Hawke, who is in the Drew Barrymore role of the cold open victim and one of the killers, Skull Mask, is definitely an homage to Ghostface, as he’s a costume that is pulled from a Spencer’s Gifts style store in the local mall.  Part 1 is a ton of fun and delivers all the slasher thrills you would want but it’s also way more clever than the typical slasher movie.  Our teen gang is actually fairly smart and realizes things quickly and they actually come up with some pretty great attempts to try and stop the killers, mostly since Josh lurks on the AOL era internet and has an encyclopedic knowledge of the towns various killers. There aren’t a lot of particular inventive kills except for one involving a meat slicer at a supermarket but the kills throughout are effectively brutal and bloody. The movie also benefits from the pre-built knowledge of being a trilogy, so there are seeds of plot that we’ll see in the next two weeks in 1978 and 1666 and there’s fun mythology building going on.  The movie also doesn’t go overboard with the “90sness” of everything, the era is mostly expressed through the soundtrack with AOL being the most prominent period identifier and none of the characters having cell phones.

The cast of Part 1 is solid throughout with Kiana Madiera and Olivia Scott Welch doing a great job of selling their characters’ past history and rebuilding their relationship as the movie progresses.  Characters like Simon and Kate, who seem like they would be typical dumb slasher movie stereotypes are also much more fleshed out and likable than you would expect and Josh is a solid comic relief character as well as the source of exposition.  Given the nature of the trilogy, some of the characters remain mysterious right now, like Ashley Zukerman’s Sheriff Goode, who seems to know more than he’s letting on about what’s going on but also seems to want to hide things as well.  1994 ends on a pretty significant cliffhanger and I’m curious to see how that is resolved, especially as the trilogy is going further and further back in time in the next two entries.

Fear Street Part 1 is a great start to this big trilogy event on Netflix and if you’re a fan of slasher movies, specifically of the 90s era, then you’ll probably love what is going on here.  I’m definitely on board for the rest of the trilogy to both see their individual stories but also to see how the larger narrative will expand and wrap up.