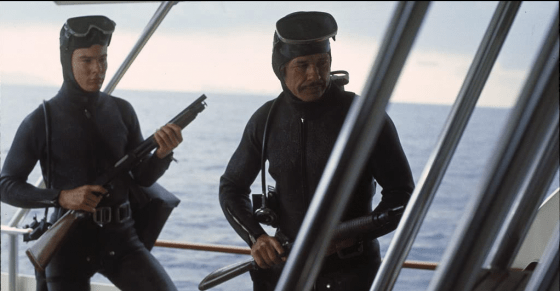 Before Jason Statham was slathering on shark repellent and taking down targets around the globe, Charles Bronson was training a young Jan Michael Vincent in the ways of the hitman in 1972’s The Mechanic.  Bronson plays Arthur Bishop an expert “mechanic” who plans out meticulous hits like the one that takes up the opening 15 minutes of the movie.  A young upstart, Steve McKenna (Michael Vincent), wants to become a hitman as well and Bronson brings him into his world, which is full of jogging, aquarium visits, taunting girls to slit their wrists, small airplane flying, karate and more.  Eventually, teacher and pupil have to face off leading to the movie’s abrupt and explosive finale.  The movie was directed by Michael Winner, who would later direct Bronson in Death Wish 1-3 and it co-starred Bronson’s wife Jill Ireland as “The Girl”.  The movie received mixed reviews upon release but it was remembered enough for the Statham remake to get made, which itself was successful enough for a sequel.  You can check out the entire movie below thanks to Youtube.