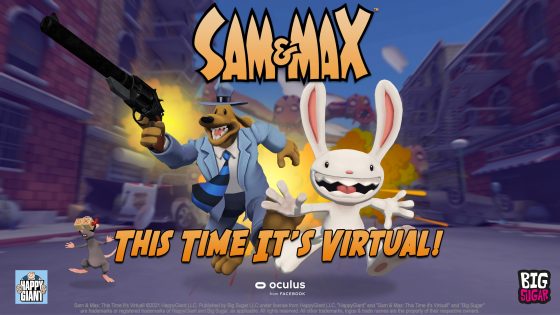 There’s been a ton to play this month between PAX Online demos and the regular amount of PC and console games we get to check out but with three VR games to play this month, I thought I’d split them off into their own VR Gamebox 2.0.  This month I strapped on my Oculus Quest and joined Sam & Max, banged on Viking drums and entered a bullet hell shooter world.

Sam & Max: This Time It’s Virtual!: It’s been a while since our favorite dog and rabbit-thing duo Sam & Max had a new game with Telltale’s “The Devil’s Playhouse” series coming out in 2010.  The Freelance Police are finally back in VR for This Time It’s Virtual from HappyGiant and, if you’re a Sam & Max fan, it’s a dream come true.  You are placed in the shoes of a new recruit to the Freelance Police, dubbed “Lumpy” by Max, and then put through Sam & Max’s training course at a dilapidated amusement park.  The game uses the full scope of what is possible in VR and borrows mechanics from a bunch of other games but combines them into one hilarious and fun package.  The training Sam & Max put you through are mini-games that include defusing bombs put in the animatronic heads of famous inventors that requires you to input Bop-It style commands, a shooting gallery using various weapons in wacky settings, an escape room where you have to navigate around and find clues, a pretty physically demanding obstacle course where you have to duck, dodge and climb through and more. 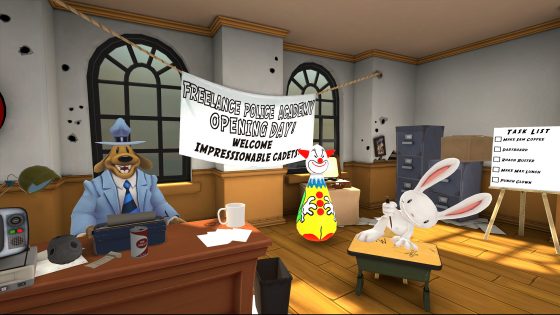 As you make your way through the various challenges, various villains and missions back at the Freelance Police neighborhood come up and you head back to help Sam & Max fight villains and unravel an overarching plot.  The sense of presence and scale you get from VR gives you the joy of seeing Sam & Max right there in front of you and they are talking directly to you, which as a fan is worth the price of admission alone but thankfully the game itself is also fantastic as well.  It’s similar in experience to Vader Immortal and the sense of presence having Darth Vader right there, full size, right in front of you.  The banter between Sam & Max is as delightful as ever with obscure references and non-sequiturs and Michael Stemmle, who has worked on Sam & Max since Hit the Road, and Sam & Max creator Steve Purcell were involved with This Time It’s Virutal’s design and writing and David Nowlin and Dave Boat voice Sam & Max (Nowlin voiced Sam for all the Telltale Games while Boat voiced Max in Poker Night 2).  This Time It’s Virtual is a fantastic VR game that fully utilizes everything VR can do with a wide variety of activities and a great sense of presence and scale.  If you’re a Sam & Max fan, this is a must-buy, must play but if you don’t have an Oculus Quest, it will be out later on PSVR, Vive, and SteamVR.

Yuki: Coming from ARVORE, the same studio behind the fantastic Pixel Ripped series, Yuki is an anime-inspired roguelike shooter where you enter the imagination of a child who has adventures with a space ranger action figure named Yuki.  You physically pick up the Yuki figure and then you maneuver her around with your hand, dodging bullet-hell attack patterns and trying to progress as far as you can.  When you die, you can unlock permanent upgrades if you have enough currency that you collect throughout the un and then try another run where the enemies and obstacles will be different.  Using your hand to guide Yuki gives you an extremely precise way of moving and you can do maneuvers that would be unthinkable in a traditional bullet hell shooter.  You also have to use the VR space to look around and through obstacles to find a hole for Yuki to get through. 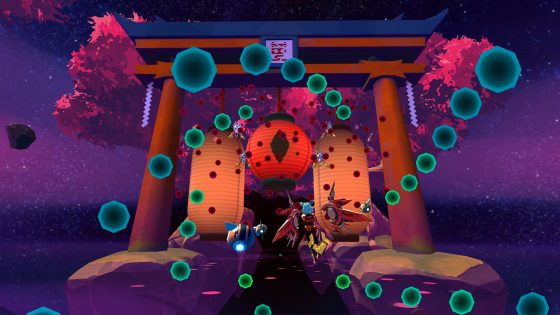 The game has a great look and there are some beautiful, Japan/anime-inspired environments to navigate through and the enemies all have a Japanese mythology and folklore vibe but translated into mechanical spaceship enemies.  You can unlock upgrades in each run, with a choice between two or more that can do things like increase your attack speed or reduce the cooldown on your special weapon.  Yuki has a robotic sidekick that can unleash a freeze blast that can give you a chance to take down a huge mass of enemies and you can also unlock different variations on Yuki that have different stats and starting weapons.  Besides Rez, I haven’t really seen this style of bullet-hell rail shooter in VR on the Quest and it’s a fantastic and fun entry in that genre.  If you’re into shooters, definitely check out Yuki.

Ragnarock: There are a bunch of great rhythm games in VR, with Beat Saber being at the top of the heap but Ragnarock is a challenging and intense new challenger to the genre.  Coming from WanadevStudio, Ragnarock puts you in the role of the drummer for a viking longboat.  You have to drum to motivate and make your crew row faster and farther than other crews but the twist is that all the songs you are drumming to are crazy metal songs from the likes of bands like Alestorm, Gloryhammer, The Sidh, Celkilt.  The game throws you into the deep end a bit as even the seemingly easy version of the songs are full of crazy and fast note patterns but luckily there doesn’t seem to be a fail state like in Guitar Hero where you fail if you miss too many notes.  The only penalty for missing notes is a lower score and your rowing crew won’t go as far as they could have if you were cranking out the notes correctly.  You really need to get into a specific way of moving and hitting the notes.  Beat Saber is a very smooth and flowing rhythm game in VR but it seems like the best way to succeed in Ragnarock is to be more stiff and precise and if you have no sense of drumming whatsoever, it might take you a while to figure out how to even hit notes properly. 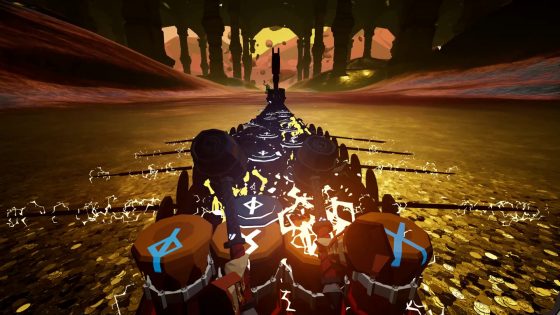 Much like Beat Saber though, Ragnarock will give you a major workout if you aren’t prepared and you’ll probably be sweaty after a few intense songs.  It’s probably one of the most physically demanding rhythm games outside of something like DDR so if you are looking for a rhythm game and something you can do for some cardio, Ragnarock will probably meet both those requirements.  One thing is that if you aren’t really into stuff like pirate metal, folk metal or the other sub-genres of heavy metal on display in Ragnarock, that’s all there is on the soundtrack so you may be better off with something like Beat Saber if you are looking for more of a variety to the music.  If you are into stuff like Alestorm and Gloryhammer, you will definitely have a blast smashing on the drums and the game also has a very cool visual style where your ship will be sailing through different realms of like Midgard and Asgard.  There’s a global leaderboard you can compare yourself to and you can compete online against other boats or race ghosts of other players in solo mode.  Ragnarock is out now on Oculus and Steam and if you love the various sub-genres of metal music and are ready for an intense rhythm game experience, definitely check it out.