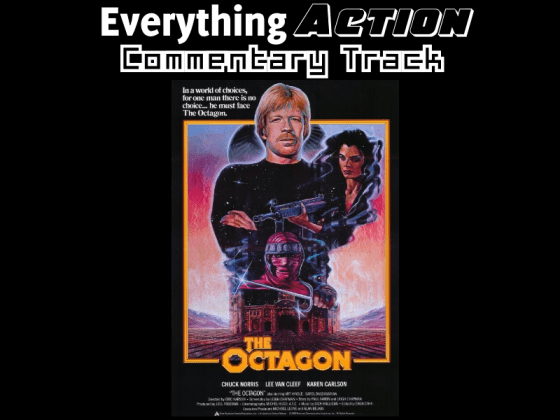 For the latest Everything Action Commentary, Zach, Chris, and special guest Addam enter The Octagon with Chuck Norris.

Norris plays Scott James, a retired karate champ who gets involved in an elaborate scheme to stop The Octagon, a secret training camp that gives criminals, terrorists, and other nefarious people the skills of a ninja.  Scott’s estranged adopted brother Seikura is the leader of The Octagon and Scott seems reluctant to face him and possibly be forced to kill him.  As things get more complicated, Scott is eventually forced to seek out The Octagon and its deadly challenges.  While watching the guys discuss the weird, creepy ASMR voiceovers from Chuck, try to figure out the schemes and motivations of the various characters, the training regime of The Octagon, the film debut of Richard Norton, what exactly is a “rock heart”, the teasing of martial arts from Ernie Hudson and more.  The Octagon is available to stream on Prime Video and you can sync it up to the commentary below and watch along with the Everything Action crew.