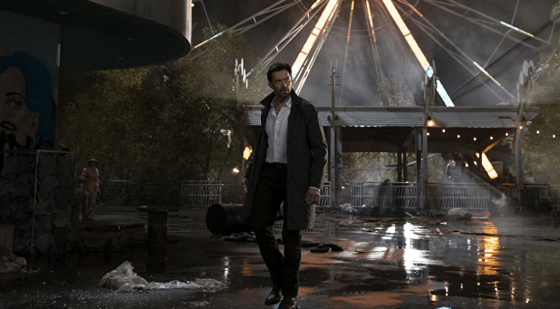 The latest theatrical/HBO Max hybrid release from Warner Bros, Reminiscence is the feature film debut of Westworld co-creator Lisa Joy that uses some great world-building and sci-fi ideas to tell a solid but familiar noir story.

Hugh Jackman stars as Nick Bannister, who sells a service that allows people to literally revisit memories through a special sensory deprivation tank.  Late one day, a walk-in client Mae (Rebecca Ferguson) arrives for help locating her keys and she and Nick begin a serious romantic relationship that ends when Mae disappears.  Nick becomes obsessed with finding Mae, spending hours in the memory tank reliving moments with her and begins to piece together that Mae had ulterior motives and was involved in a criminal plot involving a wealthy land baron.  The actual noirish storyline with femme fatales and wealthy landowners can trace its origins back to things like Chinatown and before and Reminiscence doesn’t do a whole lot to change things up.  What it does do well is world-building with its incredibly well-realized Miami that has flooded due to climate change, resulting in pseudo-Waterworld style where streets are constantly flooded and boats become a major transportation mode.  There are also some interesting tidbits about some sort of war that Nick and his partner Watts (Thandiwe Newton) were involved in.  The actual visual of the Reminiscence memory machine is also incredibly well done with stylish holograms and there are some interesting things with how it works and things like the DA’s office having to use a crappier version that projects a flat, black and white version of the memory.  There are also constant twists where scenes are revealed to be memories Nick is reliving and it’s effective the first time but it kind of loses its impact the more it continues and there’s a final twist that is effective but then raises some logic questions about the practicality of it.

Acting-wise, almost everyone is doing a fantastic job.  Hugh Jackman is great as always and really sells the hard-boiled PI side of Nick and also his obsessive quest for the truth about Mae.  Thandiwe Newton is also great and offers up a practical and unemotional counterpart to Nick.  Rebecca Ferguson seems like she was born to play a noir-style femme fatale and crushes all aspects of it and also gets to show off her singing chops multiple times through her character’s job as a lounge singer.  Daniel Wu and Cliff Curtis are the main antagonists and they are decently threatening but neither of them really have a lot to dig into and feel a bit one-note.  Both of them do contribute to the movie’s action, however, with a fantastic and stylish shoot-out at Wu’s bar lair and an extended and brutal fight between Jackman and Curtis later on in the film.  The movie isn’t an action movie but when it does switch into action a few times during the movie, it’s all extremely well done.

Reminiscence is a solid sci-fi noir that has some excellent world-building, gorgeous cinematography, and a few great action sequences but the noir story at the heart of the movie doesn’t really do anything you haven’t seen before if you’re familiar with the genre.  If you have HBO Max, it’s definitely well worth checking out at home but it doesn’t seem like one that you would need to rush out to theaters to see.