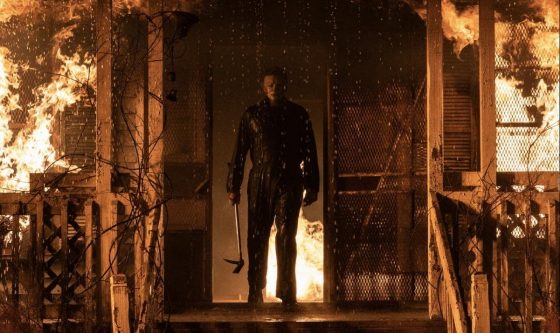 Picking up immediately where 2018’s Halloween left off, Laurie Strode’s (Jamie Lee Curtis) battle against the seemingly inhuman killing machine Michael Myers (James Jude Courtney) continues in Halloween Kills.  Surviving the fiery deathtrap set for him by Laurie, Michael kills the firefighters responding to the blaze and returns heads back into Haddonfield to kill more.  After going to the hospital, Laurie finds out Michael survived and gathers the townsfolk to hunt him down and kill him once and for all.  Along with her daughter Karen (Judy Greer) and granddaughter Allyson (Andi Matichak), Laurie gains some old allies in Tommy Doyle (Anthony Michael Hall), Lindsay Wallace (Kyle Richards), and Marion Chambers (Nancy Stephens), all characters returning from the original 1978 film and, in the case of Tommy and Marion, appeared in now non-canon entries like H20, Halloween II, and Halloween: The Curse of Michael Myers.  David Gordon Green returns to direct and seemingly brings the sense of brutality to Michael that he brought to the 2018 movie and sprinkling some homages to other movies in the franchise, like Halloween III, throughout.  Halloween Kills hits theaters and Peacock for subscribers on October 15th and you can check out the final trailer below.