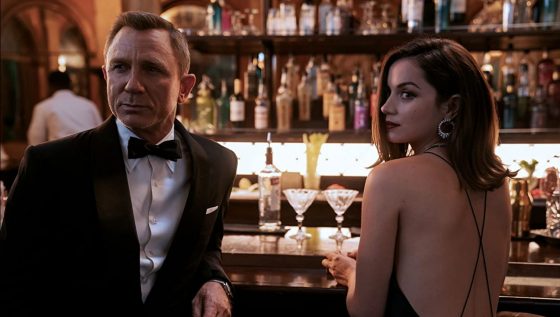 After being one of the first huge movies to be delayed because of the pandemic, No Time to Die finally hit theaters in the US this past weekend and took the top spot at the box office.

No Time To Die opened to $55.2 million over the weekend, which was one of the biggest openings of 2021 but expectations for the final Daniel Craig film and the length of time audiences were waiting for it put expectations slightly higher and it’s definitely slightly disappointing compared to Venom: Let The Carnage’s massive opening last weekend.  Compared to the other Craig Bond movies, No Time To Die actually topped Casino Royale’s opening but was below the other three movies in his series.  Skyfall opened the biggest and made the most money worldwide and it could be argued that either that film or Casino Royale was Craig’s best outing as Bond.  Worldwide, No Time to Die has topped over $311 million and is the ninth highest grossing film worldwide of 2021.

Venom: Let There Be Carnage dropped 65% from last weekend and fell to second with another $31.7 million, taking it to over $141 million already for just two weeks out.  The movie has made $43 million outside the domestic market for a worldwide total of $185.3 million.  It’s currently the fifth highest grossing film domestically of 2021 and sitting at 16th right now worldwide.

The Addams Family 2 dropped to third place with another $10.1 million, bringing it to $31.2 million domestic and $35.9 million worldwide (it hasn’t really had much of a relase outside of the domestic market).

Shang-Chi and The Many Saints of Newark rounded out the top 5.  The latter dropped a whopping 69% from last weekend and most folks who are interested in seeing it either again or for the first time after hearing the opening weekend word of mouth are probably deciding to just check it out on HBO Max.

Further down the list, the latest strangeness from A24, Lamb, took eighth place with $1 million in 583 theaters and another small release, Doctor, opened to 10th place with $220,000 in 119 theaters.

The Per Theater average went to the documentary The Rescue from National Geographic which told the story of the rescue of 12 boys and their coach who were stranded in a flooded cave in Thaisland.  The movie made $13,932 in each of the 5 theaters it played in.