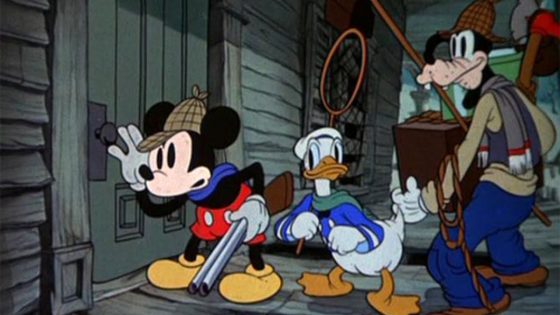 Decades before the Ghostbusters strapped on proton packs, Mickey, Donald and Goofy were the Ajax Ghost Exterminators in the classic Disney cartoon, Lonesome Ghosts.  Debuting in 1937, Lonesome Ghosts was the 98th Mickey cartoon released and the ninth one released for that year.  Walt Disney provided the voice of Mickey while Clarence Nash voiced Donald and Pinto Colvig voiced Goofy.  In the cartoon, a group of ghosts are actually the ones who hire Mickey, Donald, and Goofy to come out to their creepy old mansion with the request for the trio to get rid of the spirits haunting the house but they actually are just bored and want to pull some pranks on the living.  The Lonesome Ghosts themselves have appeared in various forms throughout the years after their debut in the short, including in a level of Mickey Mania in 1994 for SNES and Genesis, in various VHS and DVD collections, and most recently returned to screw with Mickey in the “Houseghosts” episode of The Wonderful World of Mickey on Disney+.  You can watch Lonesome Ghosts on Disney+ but you can also watch it below thanks to the official Mickey Mouse YouTube channel.

Everything Action Theater: Prep and Landing