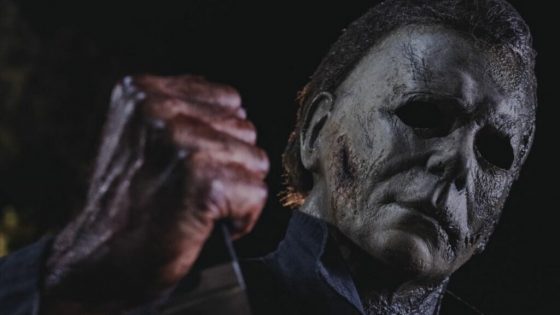 The 2018 sequel to Halloween, confusingly just called Halloween, was a solid return for Michael Myers and Laurie Strode that paid homage to the original John Carpenter classic while bringing in some more modern touches, like a much more brutal Michael.  Halloween Kills, the second movie in a planned David Gordon Green trilogy, still has the brutal kills, which is probably the biggest selling point, but it’s a messy hodgepodge of random plots and ideas that feels like wheel-spinning before the big “final” showdown in Halloween Ends.

Picking up right where 2018’s Halloween left off, Laurie Strode (Jamie Lee Curtis) is rushed to the hospital with her daughter Karen (Judy Greer) and granddaughter Allyson (Andi Matichak) believing they have killed Michael Myers once and for all.  Michael survives the fiery inferno deathtrap set by Laurie, slaughters a group of firefighters, and returns to Haddonfield to continue the killing spree that he started earlier that night.  Meanwhile, Tommy Doyle (Anthony Michael Hall), who Laurie was babysitting back in 1978, learns of Michael’s return and rallies the citizens of Haddonfield to hunt him down and stop him once and for all.  On top of that, there are numerous flashbacks back to 1978 that picks up where that original movie left off as the police pursue Michael after he disappeared following Dr. Loomis shooting him off the balcony of the Doyle house that ties into the backstory of Will Patton’s Frank Hawkins.  The biggest flaw with Halloween Kills is that there isn’t any forward momentum to this new plotline, Michael just kills a bunch of people again, and then we’re left with the setup for the actual finale of the trilogy, Halloween Ends.  There’s nothing between Laurie and Michael, as Laurie is bizarrely sidelined in the hospital for basically the whole movie and the hyped return of characters and actors from the original movie is a letdown and slightly hilarious as a number of the familiar faces are dispatched by Michael without breaking a sweat.  The movie also grows to a cartoonish pitch with the mob mentality of Haddonfield, leading to an interminable sequence where the town literally turns into maniacs at the hospital and tries to hunt down the other mental patient that escapes with Michael, because they believe he is Michael.  The character development of the first movie also takes a step backward as well, especially Karen and Allyson despite what they just witnessed in the previous movie.  Karen reverts back to her overly protective, disbelieving self while Allyson kind of turns into a generic dumb horror character, gung ho about single-handedly taking on the unstoppable killing machine that is Michael Myers.  Halloween Kills overall feels like there were enough ideas for two movies but they committed themselves to a trilogy and filled this movie with a bunch of random odds and ends to cobble together a movie.

If there’s one thing that Halloween Kills does have, it’s over-the-top violence with some of the most brutal kills (and highest body count) in Michael’s long career.  From the opening battle with the firefighters that includes some cool touches like POV shots to a brutal sequence where Michael kills an older couple and gets his new knife and if you’re a fan of gore and kills, there’s plenty of it on display here.  Michael’s mask also gets a burned “upgrade” that makes him look somehow even more intimidating than ever and the music is on point as always too, with some killer new tracks from John Carpenter.  There are also some fun references outside of the returning characters to the franchise, like some of the victims getting the Season of the Witch masks put on their faces and multiple returns to the Myers home in the different time periods, including 2018 where it’s now the home of a gay couple played by Scott McArthur and Michael McDonald who have a bizarrely extended side plot throughout the movie.

It remains to be seen but Halloween Kills will probably prove to be pretty inessential to the Halloween franchise, especially if Halloween Ends is actually able to deliver a solid conclusion.  Besides creative and violent kills, the movie just puts the series into a holding pattern until whatever David Gordon Green, Danny McBride, and their team come up with for the finale to the trilogy without much character development or interesting reveals or plot developments.