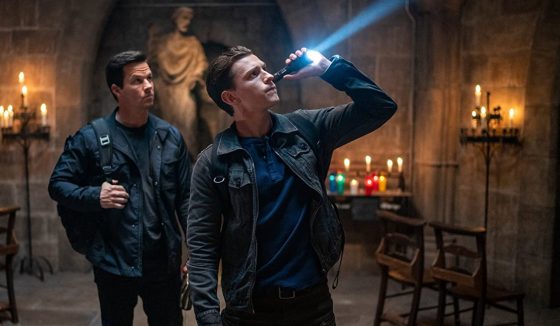 After years in development, our first look at the Uncharted movie is finally here.  Based on the excellent Playstation games by Naughty Dog, Tom Holland stars as adventurer Nathan Drake for one of his earlier adventures before Drake’s Fortune.  He’s discovered by Victor Sullivan (Mark Wahlberg) and the duo set out to find a lost treasure that could be worth billions and could also give Nate answers about his brother Sam.  There’s a villainous Antonio Banderas after the treasure as well, so it’s a race around the globe to see who can find and claim it first.  Sophia Ali co-stars as Chloe Frazier and Tati Gabrielle is Banderas’ main enforcer, Braddock.  I don’t think any of us are sold on Wahlberg’s take on Sully but Tom Holland seems as charming as ever and there’s some stuff right out of the game’s, like the cargo plane sequence from Uncharted 3 and the Sam Drake stuff seems to be pulled from Uncharted 4, even though that game is set much later in the timeline.  Ruben Fleischer, who most recently brought us Venom, is directing and the movie is out on February 18th next year.  Check out the trailer below.

Uncharted Jumps From Playstation to Theaters in February (Trailer)