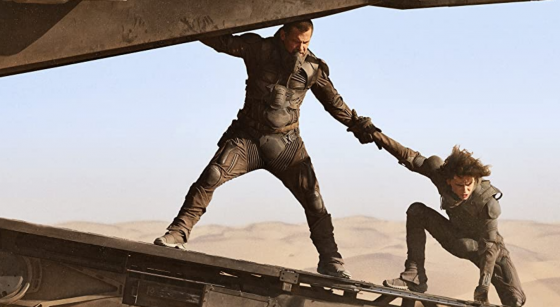 Dune managed to come in slightly over expectations with a solid domestic opening to add to its already solid international numbers and took #1 at the box office this past weekend.

Dune took in $41 million for the weekend, which is the best opening ever for director Denis Villeneuve, topping his previous high of Blade Runner 2049, which made $32.7 million in 2017.  It’s also well above what the 80s David Lynch Dune made in its opening weekend, which even adjusted for inflation is $16.4 million.  2021’s Dune has grossed just over $223 million worldwide.  Almost 2 million households watched Dune according to analyst group Samba TV, which is solid but not quite as much as say, The Suicide Squad, which had 2.8 million households its opening weekend but Dune’s theatrical performance is much better.  Hopefully, the HBO Max numbers plus its box office gives us a much-needed Dune Part Two.

Halloween Kills dropped to second place with a massive 71% drop-off from last weekend.  The movie took in another $14.4 million and it currently has $73 million domestic and $90.7 million worldwide.  The entire Halloween franchise now has a collective worldwide gross of over $700 million.

Venom: Let There Be Carnage took fourth place with $9.3 million, bringing it to $182 million domestic and over $352 million worldwide and Ron’s Gone Wrong opened to fifth place with $7.3 million.  It’s slightly above expectations but below most of the other big animated family movies from this year, like Tom and Jerry, Raya and the Last Dragon, and The Boss Baby: Family Business.  There’s no family movie competition really until November 10th when Clifford the Big Red Dog comes out, so if Ron’s Gone Wrong can hold well, it might have a slow burn and make some money for Disney/Fox.

Further down the list, the latest from Wes Anderson, The French Dispatch, opened in ninth place with $1.3 million in just 52 theaters.  It opens wide this coming weekend.  That performance easily took the Per Theater average for the weekend as well, as the movie made $25,939 in each of those 52 theaters.