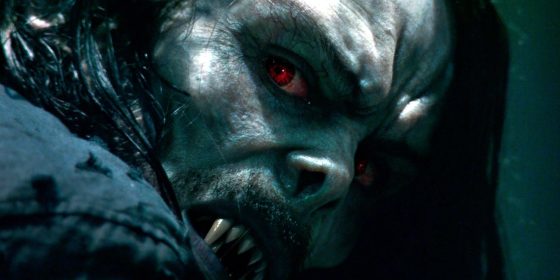 One of the many movies that saw seemingly endless delays because of the pandemic, Morbius is set to finally arrive in theaters in January next year.  Picking up Sony’s Spider-Man sideverse thread from the Venom movies, Jared Leto stars as Dr. Michael Morbius, who heads to the rainforest in an attempt to find a cure for the disease that almost killed him and instead finds himself becoming a “living vampire” with enhanced abilities, flight, and super strength but also an unquenchable thirst for blood.  Michael Keaton, Matt Smith, Tyrese Gibson, Adria Arjona, Al Madrigal, and Jared Harris co-star with Keaton’s appearance, in particular, is super intriguing as he’s reprising his role of Adrian Toomes from Spider-Man: Homecoming and seemingly pushing this Sony universe closer to the MCU and Spidey himself.  There’s also an acknowledgment of Tom Hardy’s Venom with reference to incidents in San Fransisco and Morbius seemingly aware of his fellow anti-hero by joking that he’s him.  Daniel Espinosa, who directed movies like Life and Safe House, is directing and the movie releases on January 28th, 2022.  Check out the new trailer below.

Jared Leto is the Living Vampire in Morbius (Trailer)