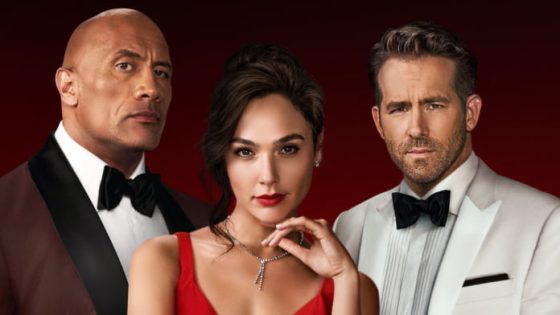 One of the biggest original movies in Netflix history, Red Notice assembles the A-list team of Dwayne Johnson, Ryan Reynolds, and Gal Gadot for a global adventure that starts out strong but gradually starts to wear thin and eventually feels like an extended setup for a sequel.

Dwayne Johnson plays FBI profiler John Hartley, who is after two of the biggest art thieves in the world, Nolan Booth (Ryan Reynolds) and the mysterious Sarah Black aka The Bishop (Gal Gadot).  Booth and Black are both after Cleopatra’s Eggs, a trio of priceless relics that an Egyptian billionaire is willing to pay a ludicrous price for to be able to present them to his daughter on her wedding day.  Hartley manages to catch Booth with the help of Interpol agent Das (Rita Aryu) but Black manages to make it look like Hartley was stealing the first egg recovered for himself and he finds himself thrown into the same Russian black site prison as Booth.  The pair reluctantly agree to work together to escape and get the eggs before Black can and so Hartley can arrest her.  The movie starts out strong with a fun chase through a Roman museum with lots of parkour from Booth and a great joke where it seems like a car chase is going to start before being immediately derailed but as the movie goes on, the action gets more elaborate but also more bloated with surprisingly bad CG and the banter gets somewhat exhausting after two hours.  Ryan Reynolds is at an 11 for the entire movie but unfortunately, the jokes are more miss than hit.  Director Rawson Marshall Thurber wrote and directed the movie but it might have helped if Reynolds’ go-to writing team, Rhett Reese and Paul Wernick, had been brought in or someone similar to punch some things up.  The rating also might be hindering as well as compared to, say, The Hitman’s Bodyguard where Reynolds was free to say whatever he wanted thanks to the R rating, here there seems to be a struggle to come up with insults that don’t push things too far.  The movie also can’t help but draw comparisons to other similar movies from the stars that were, in my opinion, more fun than Red Notice, like The Rundown or Hobbs and Shaw, especially for Dwayne Johnson.  Gal Gadot seems to have had a blast here and she’s probably the most fun character as she’s always one step ahead and seems to greatly enjoy teasing the reluctant duo and also beating the crap out of them when needed.

As mentioned the action starts out fun with a parkour-style chase through a Roman museum but while things ramp up, they also look progressively worse as more and more CG gets layered on.  There’s a car chase through South American mines later in the movie that feels the same as the terrible finale of Fast & Furious in the border tunnels where there’s no weight or sense of danger to anything.  There’s also some choppy editing, especially in what should have been the centerpiece fight with the starring trio in a rich arms dealer’s treasure vault, that takes away some of the enjoyment of the sequences.  The movie also commits the crime of featuring Daniel Bernhardt in a cameo but never giving us any big fight sequence with him.  There is some fun heist movie stuff as Booth and Hartley plan to outplay Black and steal the eggs and it even becomes sort of Indiana Jonesesque later on but it definitely could have leaned in more on either of those genre homages.  The heist could have been even more elaborate or there could have been more heists and the secret vault, later on, could have been a whole sequence with traps and puzzles to solve but the movie doesn’t seem to have time and just keeps rushing from one exotic locale to the next.

Red Notice isn’t terrible but the main trio has all appeared in similar movies that do what Red Notice does but either with better banter, better action, or both, like The Rundown or The Hitman’s Bodyguard.  There’s some surprisingly terrible CG that increases as the movie progresses and it gets fairly exhausting with its efforts to be funny, especially from Ryan Reynolds.  It’s a decent watch if you’re scrolling through Netflix and just want a decently fun adventure but with the budget and stars involved, it feels like it should have been way better than it is.