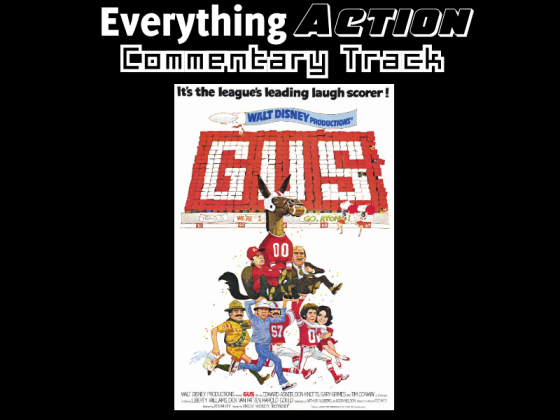 For the latest Everything Action Commentary, Zach and Chris checked out the 70s Disney classic Gus, starring Ed Asner, Don Knotts, and a field goal-kicking mule.

When the failing California Atoms bring in Andy Petrovic and his mule Gus for their half-time show, it’s just supposed to be a fun stunt for the fans but team owner Hank Cooper decides to put in Gus as his new placekicker.  After ruling it legal, Gus and Andy start to lead the Atoms on a winning streak that puts them on the path to the Super Bowl.  Because he made a bet with the team’s financial backer, Charles Gwynn, that Gwynn would finance the team for another year if they win the Super Bowl, Gwynn hires wacky criminals Tim Conway and Tom Boseley to attempt a number of schemes to foil Gus, culminating in a kidnapping and chase through a supermarket.  The guys try to figure out how the movie has both fake and real NFL teams, if Andy’s soccer-obsessed father is the true villain of the movie, 70s food in the background, Dick Butkus, Tom Boseley’s many disguises, and much more.  The movie is available to stream on Disney+ and you sync it up to the commentary below and watch along with the Everything Action crew.