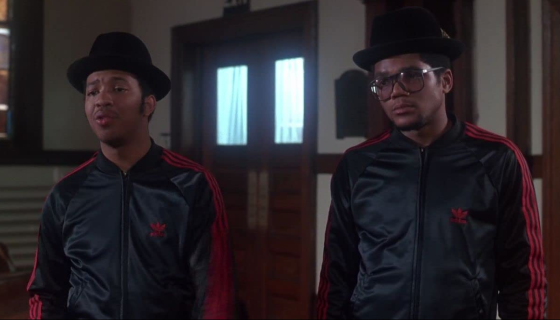 Coming out around the same time as other hip-hop movies like Breakin’, Wild Style and Beat Street, 1985’s Krush Groove was a fictionalized spin on the story of Def Jam Recordings, renamed Krush Groove, and featuring a murderer’s row of amazing 80s rappers and singers like Run DMC, The Beastie Boys, LL Cool J, Sheila E, Kurtis Blow, The Fat Boys, Debbie Harry, New Edition, Full Force and many more.  Blair Underwood stars as the movie’s Russell Simmons stand-in, Russell Walker, who forms Krush Grove and signs Run DMC, Kurtis Blow, Dr. Jeckyll & Mr. Hyde and Kurtis and others to the label with the legendary Rick Rubin producing their albums.  Run DMC blows up but Walker doesn’t have enough money to press records, so he has to borrow money from a street hustler.  There’s also a side story about Russell and Run competing for the affections of Sheila E.  Obviously the movie’s soundtrack was jam-packed with songs from the artists who appeared in the movie but it wasn’t as big of a hit as you might expect, peaking at #14 on the R&B charts and #79 on the Pop charts.  The Fat Boys even received a Golden Raspberry nomination for their song “All You Can Eat”.  Check out some of the songs from Krush Groove below.