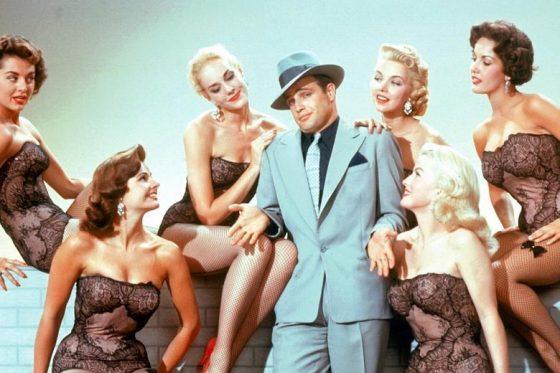 If you are looking for some big, splashy Hollywood musicals to go along with this weekend’s release of Steven Spielberg’s new West Side Story, you can watch the 1955 classic Guys and Dolls for the latest Everything Action Theater.  Based on the 1950 Broadway musical that was in turn two short stories by Damon Runyon, the movie version stars Marlon Brando, Frank Sinatra, Vivian Blaine and Jean Simmons with Sinatra playing gangster/gambler Nathan Detroit.  Detroit is looking to get an illegal craps game going but needs $1,000 as a security deposit on the location he wants to hold the game in.  Running into his old acquaintance Sky Masterson (Brando), he makes a bet with Masterson that he can’t get a girl that Nathan chooses to go to dinner with him in Havana.  Nathan chooses Sister Sarah Brown, who works at the Save a Soul Mission.  All the usual hi-jinks of classic musicals ensue set to classic songs like “Luck Be a Lady” and the title track along with new songs created specifically for the movie, “Pet Me Poppa”, “(Your Eyes Are the Eyes of) A Woman in Love”, and “Adelaide”.  Sinatra obviously did his own singing but Brando and Jean Simmons did their own singing as well.  The movie was nominated for multiple awards, including four Oscars and it won Best Musical or Comedy and Best Actress in a Musical/Comedy for Jean Simmons at the Golden Globes.  In July this past summer, there was news that director Bill Condon was going to direct a remake of Guys and Dolls, so we’ll have to see if it will follow West Side Story’s lead.  The entire movie is available below thanks to YouTube.