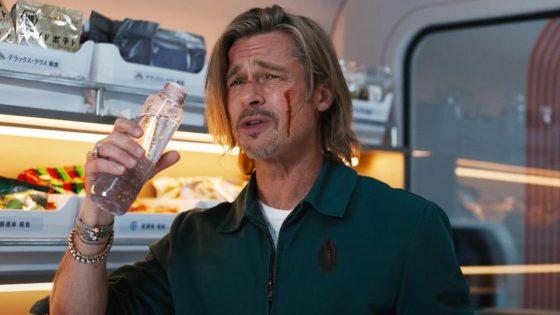 Brad Pitt battles a bunch of colorful assassins this coming July in the latest action movie from director David Leitch, Bullet Train.  Based on a Japanese novel, Pitt plays Ladybug, who takes a job to retrieve a briefcase on board a bullet train in Japan but is getting fed up with his life as a trained killer.  He soon learns that the train is full of other assassins and operatives that want the briefcase as well and has to battle them all while finding out what is actually going on with this latest job.  Aaron-Taylor Johnson, Joey King, Hiroyuki Sanada, Andrew Koji, Brian Tyree Henry, Zazie Beetz, Logan Lerman, Bad Bunny, Masi Oka, Michael Shannon, and Sandra Bullock co-star.  Leitch, of course, helped to create the John Wick franchise with Chad Stahelski and directed Atomic Blonde and Deadpool 2 and it looks like Bullet Train will be full of his highly choreographed action sequences.  Bullet Train arrives on July 15th and you can check out the trailer below.