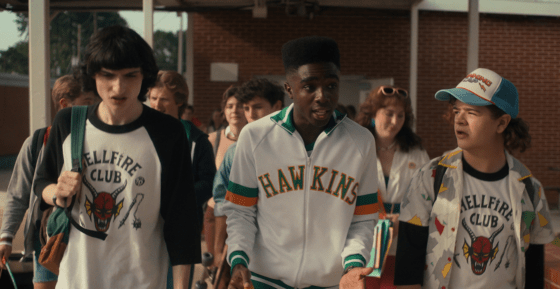 It’s been almost three years since the third season of Netflix’s mega-hit Stranger Things dropped on the streaming service but the Hawkins gang is finally back in May with the highly anticipated fourth season.  Following the events of the third season finale, Joyce (Winona Ryder), Will (Noah Schnapp), Jonathan (Charlie Heaton), and Eleven (Millie Bobby Brown) left Hawkins to try and start a new life across the country while Hopper (David Harbour) was believed to be killed in an explosion that destroyed the secret Russian base under Starcourt Mall but he was in fact captured and sent to a wintry Russian prison.  The rest of the gang, Mike (Finn Wolfhard), Steve (Joe Keery), Nancy (Natalia Dyer), Max (Sadie Sink), Dustin (Gaten Matarazzo), Lucas (Caleb McLaughlin) and Robin (Maya Hawke) are trying to move on as well and live normal lives but things get weird and dangerous again as some sort of Night Kingesque mastermind is gathering the forces of the Upside Down for a war with the normal world and the creepy old Creel House in Hawkins might be the nexus of this new evil force.  Priah Ferguson, Brett Gelman, and Cara Buono are back along with Paul Reiser and Matthew Modine in what seems like more Eleven flashbacks.  Robert Englund is also joining the cast for the new season.  The fourth season will be 9 episodes split into two batches, with the first batch hitting Netflix on May 27th and the next batch on July 1st.  Check out the trailer below.