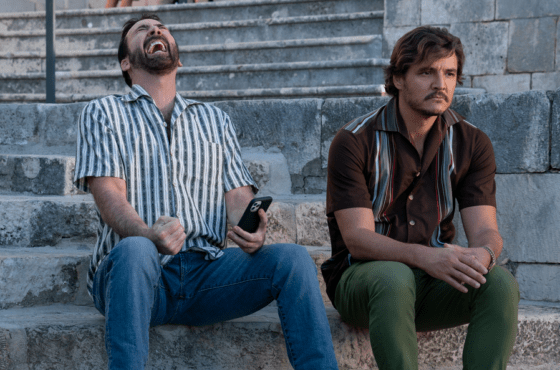 Nicolas Cage has played many memorable and over-the-top characters over his career but in The Unbearable Weight of Massive Talent he takes on possibly his greatest role, himself (or at least a fictionalized version of himself).

Cage plays a version of himself, Nick Cage, who is struggling to get roles after being a superstar in movies like Face/Off and The Rock and also losing touch with his wife Olivia (Sharon Horgan) and his daughter Addy (Lily Mo Sheen) because of his constant need to work and be the center of attention.  After losing out on a juicy role in some sort of David Gordon Green Boston crime drama, Nick accepts a gig from his agent, played by Neil Patrick Harris, to attend the birthday party of the wealthy Javi (Pedro Pascal) in Spain for $1 million.  Initially dejected about the whole thing, Javi and Nick bond over their love of similar movies but Nick is approached by the CIA (Tiffany Haddish and Ike Barinholtz) because it turns out Javi is, according to them, a ruthless arms dealer who has kidnapped the daughter of a political rival and they want Nick to spy on his new friend.  The plot is fine and keeps things moving and the movie is extremely meta about it as Nick and Javi brainstorm ideas for a screenplay, throwing out ideas that manifest in the actual movie we’re watching.  There are some fun action set pieces, especially toward the end that lets Cage lean back into his 90s action superstar persona but the real meat of the movie is the hilarious bromance between Javi and Nick.  Pedro Pascal and Nic Cage have fantastic chemistry and a wonderful back and forth dynamic that only gets better the more the movie goes on.  Pascal is doing something similar to Noho Hank from Barry where he’s supposed to be a ruthless criminal but is exuberantly positive and sweet about everything.  There are actually a lot of similarities to Barry between Pascal’s performance and the Hollywood satire mixed with action/crime thriller elements but it also feels a bit like what Van Damme was doing in movies like JCVD and shows like Jean Claude Van Johnson.  If you’re a fan of any of those plus Nicolas Cage, you’ll find plenty to love about Unbearable Weight.

Like almost every project he’s ever done, Nicolas Cage commits 1000% to his role as this slightly exaggerated version of himself and gives you all the aspects of Cage that you could want, from the goofy to the serious to the over the top.  There are actually not a lot of direct quotes or impressions from his previous roles but the vibe of certain eras of Cage or his general quirky public persona are highlighted throughout.  There are a bunch of references to his classic roles along with things like his penchant for getting into debt and there’s even a hilarious recurring element of a digitally de-aged hallucination “Nicky” that Cage consults with throughout the movie that is the ranting and insane version of Cage that you saw in movies like Vampire’s Kiss that is constantly trying to get Cage to drop the smaller movies and get back to his true nature as a superstar.  Along with all the Cage references, the movie is just generally really clever and fun with lots of character-based humor and situations, like a brilliant sequence where Nick and Javi drop LSD and drive around town for inspiration on their screenplay.

If you’re a fan of Nicolas Cage, The Unbearable Weight of Massive Talent is a must-watch as it’s a clever homage to the full scope of Cage’s career while also not being afraid to play up the quirkier and crazier sides of his persona and he and Pedro Pascal are perfectly matched as quickly growing friends.  It’s a great addition to the Cageaissance that has seemed to be picking up in the last couple of years and will hopefully continue into the future.

One thought on “Review: The Unbearable Weight of Massive Talent”