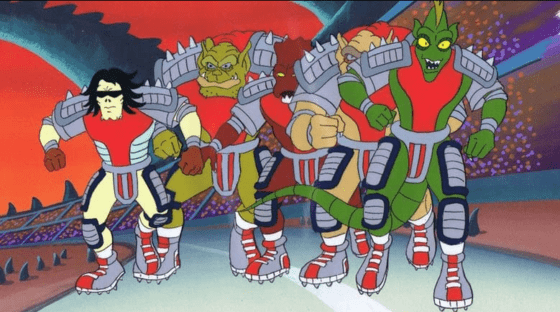 Youtube channel Throwback Toons, who have put out full episodes of shows like Men in Black: The Series, Godzilla: The Series, Dilbert, Jumanji, and Jackie Chan Adventures has now started with the more obscure 90s cartoon Mutant League.  Based on the cult favorite Sega Genesis sports games, Mutant League Football and Mutant League Hockey, Mutant League the series followed a sports league that came about after an earthquake unleashed toxic waste during a football game, transforming the athletes into mutants.  Bones Justice is the superstar quarterback for the Monsters, the only team in the league not owned by the corrupt Zalgor Prigg, and he’s on a quest to find out what happened to his father while leading the Monsters to victory against the teams owned by Prigg in football but also hockey, baseball, soccer, volleyball, monster truck racing and more.  The show ran for two seasons between July 1994 and February 1996 with 40 episodes total.  The show had a line of action figures but made almost no impact on toy shelves.  The games are remembered much more than the show and a spiritual successor to Mutant League Football was released in 2017 that brought the game series to the PS4, Xbox One, PC and Switch with a game that paid homage to the original but also drew inspiration from games like NFL Blitz, even getting Blitz announcer Tim Kitzrow to do the announcing for this new Mutant League game.  You can check out the first episode of Mutant League below.