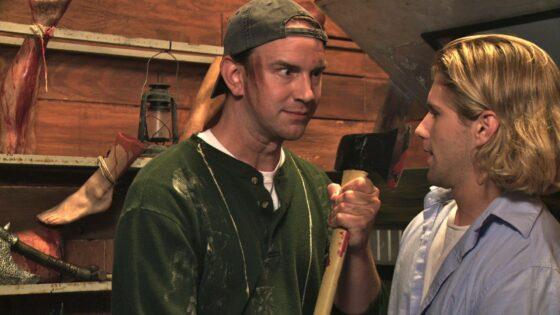 One of the most fun scenarios, at least for me, in the world of slasher movies is the “real killer in a haunted attraction”.  You get to have fun with making the set as cheesy or professional as you want and you get to do fun stuff like having people believe everything is part of the show, so the killer can keep getting away with taking out their victims.  Movies like Hell Fest and Haunt were super entertaining and the recently released Scare Zone is also a lot of fun as well.

Filmed on location at Universal Studios Orlando in 2008 in the “Body Collectors: Collections of the Past” haunted house, that attraction becomes the Scare Zone, a strip mall haunted attraction that has become a cult favorite and is open for its third year.  The baby of owner Oliver (Simon Needham), he has a few veteran employees including goth gift shop manager Claire (Arian Ash), scare actor Summer (Michele Simms), and front door hype man Spider (Neil Brown Jr.).  The attraction gets a slew of new employees, who are all assigned different roles and areas of Scare Zone and it seems like all fun and games until the staff starts disappearing and a real killer is revealed to be stalking the halls.  The movie does a great job of setting up the whodunnit? Side of slasher movies as there are a few characters who could potentially be the killer like is Oliver too obsessed with making his haunted house realistic or is Claire taking her obsession with death too far?  The temporary nature of the Scare Zone is also a great way to keep the killer’s deeds hidden, as everyone just assumes the people missing just quit, so they aren’t really worried about finding them.  Since they are in an actual Universal Studios haunted house, the set design is obviously fantastic. They can use the gimmicks and tricks that were built into the attraction while adding their original touches. It does a good job of splitting the difference between “this is a cheesy local attraction” and “this is part of a multimillion-dollar theme park event”.  The movie also has a clever way to show off the entire location as the new cast members (and the audience) are led through the whole house early on, so you get a really good idea of what rooms lead into other rooms and where everything is for later on in the movie.  The gore and kills also play into that as there are lots of fun practical effects and kills that use the props and sets of the Scare Zone, like someone getting thrown into a vat and covered in lye or someone getting killed against the front windows of Scare Zone and everything bursting into cheers because they think it’s part of the show.

The cast mostly falls into horror archetypes but the movie is self-aware enough to subvert some expectations and characters you might expect to be early kills survive till the end and vice versa.  The standouts in the cast are Simon Needham, who brings a ton of enthusiasm, excitement and British wit to Oliver,  and Neil Brown Jr, who seems to be having a blast as the main promoter/bouncer/cashier of Scare Zone and he has some funny one-liners and takedowns of the sometimes rowdy fans.  Arian Ash as Claire becomes more important as the movie progresses but her increasingly dark and dramatic backstory and personal issues clash a bit with the mostly goofy and fun tone of the rest of the movie, with some awkward moments where she has monologues about her past that veers close to Phoebe Cates Gremlins territory.  Some gags and jokes don’t quite work or lean too far in the wacky direction and there’s also a somewhat strange reliance on montages that seems to only be there for promoting indie bands on the soundtrack.

Scare Zone is a fun slasher movie that is self-aware and funny while also giving some entertaining practical kills and gore in a well-utilized setting.  The use of an actual Halloween Horror Nights house gives it immediately great production values (at least inside the Scare Zone itself) and it feels like a movie that you would see and have a blast watching at a horror convention with fellow horror fans.  You can watch Scare Zone On Demand at places like Amazon or Vudu and you can also watch it on the Terror Films Youtube channel.